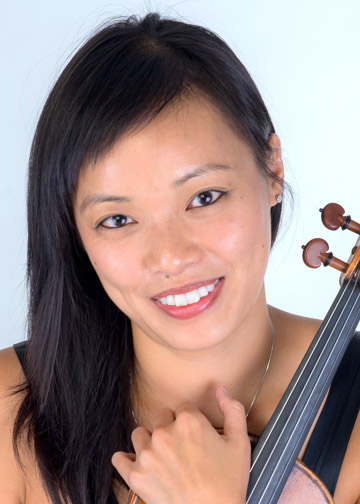 Canadian violinist Jessica Tong has garnered international acclaim as a soloist, recitalist and chamber musician, having been described as an "outstanding talent" (Performing Arts in Canada) with "keen sensitivity and receptivity" (Bloomington Herald Times), who "allow[s] us to savour her sense of ardour and intensity, but never at the detriment of her tonal beauty." (ClassiqueInfo France). A recipient of a Canada Council Grant for Musicians and a DAAD scholar, she has been a top prizewinner at the Eckhardt-Gramatte, Toronto Symphony, Canadian Music, and Yellow Springs International Chamber Music Competitions, as well as the recipient of the David Ouchterlony Award for Outstanding Artist.

A devoted chamber musician, Ms Tong's performances have taken her to Weill Recital Hall at Carnegie Hall, the Kennedy Center, Merkin Hall, les Invalides in Paris and the Gewandhaus in Leipzig, and led to collaborations with artists such as Pamela Frank, Leon Fleisher, Cho-Liang Lin and members of the Cleveland, Vogler, Brentano and Borromeo Quartets. She has served as the first violinist of the Vinca and Larchmere String Quartets, and recently held the post of Artist-in-Residence at the University of Evansville and concertmaster of the Evansville Philharmonic Orchestra in Indiana. Her debut album of chamber works by Stephan Krehl with the Larchmere Quartet and clarinetist Wonkak Kim was released in 2016 by Naxos Records to critical acclaim.

Dedicated to finding innovative ways to make the classical music art form relevant and understood by current society, Ms Tong is also a passionate advocate for music education and humanizing the concert experience. She has been an Artist-in-Residence for the Perlman Music Program in Florida, the Gorgeous Sounds Program in Oregon and a two time recipient of the ProQuartet Odyssee Residency Grant in France. She has also served as a Co-Artistic Director for several chamber music workshops including Chamber Music of the Rockies in Colorado, University of Florida’s ChamberFest, and the Harlaxton Music Festival in England. She is the co-founder of the chamber music residency organization Music Beyond the Chamber, and currently serves as the Chamber Music Director for the Composers Conference at Brandeis University in Massachusetts, as well as the Assistant Professor of Violin at the State University of New York Fredonia.

A pupil of Pamela Frank, Jessica has also studied with Kathleen Winkler, Donald Weilerstein, and Zhang yun Zhang, and has been mentored as a chamber musician by members of the Alban Berg, Vogler, Artemis and Brentano Quartets.

Her ongoing fascination with mind-body connection and its relevance to music performance has also led her to explore the science of yoga in-depth and complete her teacher certification at the Kripalu Center in Lenox, Massachusetts. In addition to performing and teaching, she often leads workshops and masterclasses with high school, university and adult amateur musicians, that explore the art of mindful movement and body awareness in instrumental playing.