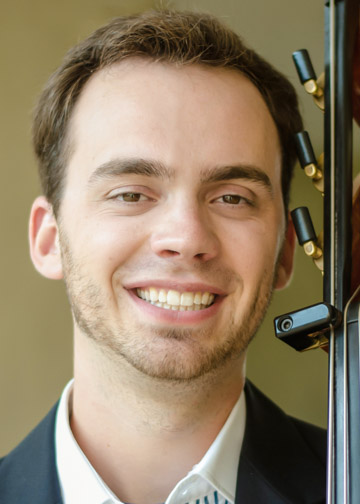 Kieran J. Hanlon is Assistant Professor of Double Bass and Jazz at The State University of New York at Fredonia. In addition to his teaching, Kieran is a first call performer in both the classical and jazz idioms, and enjoys a diverse performing career in both genres (among others). Kieran performs on both acoustic and electric basses.

In May 2014, Kieran completed a Master of Music Degree in Double Bass Performance at the Eastman School of Music with Professor of Double Bass James VanDemark. He also completed Eastman’s Orchestral Studies Program, in which he worked as a playing intern for two seasons with the Rochester Philharmonic Orchestra. Kieran’s undergraduate studies were completed at The University of Michigan School of Music, Theatre and Dance in April of 2012, where he studied classical repertoire with Professors Diana Gannett and Stephen Molina and jazz with Professor Robert Hurst. He holds a B.M. in Double Bass Performance and a B.F.A. in Jazz Studies, Bass from Michigan. He also won third place in the Orchestral Competition at the International Society of Bassists 2013 Convention in Rochester, NY.

As an active arranger, Kieran has written and continues to write custom works for Fredonia faculty ensembles, focusing on increasing the scope of repertoire the faculty performs by incorporating jazz, pop and improvised music.

Kieran has performed by invitation with the Canandaigua Lake Chamber Music Festival, the Lake George Music Festival, and the Gateways Music Festival. He also spent the summer of 2011 as a Rotating Principal Bassist with the National Repertory Orchestra in Breckenridge, CO. As a chamber musician, Kieran performed and recorded extensively with the chamber choir Madrigalia in Rochester, NY on cross-genre compositions and arrangements for choir and chamber ensemble by composers John Rutter and Cary Ratcliff among others.

Outside of the music world, Kieran enjoys spending time with his wife Liz (clarinet faculty at Fredonia), daughter Eva, their greyhound Jay, working on his house and vehicles, biking, hiking, spending time near Lake Erie, and quality time in fellowship with good friends and colleagues.

Diversification of the student's skill set to increase career options