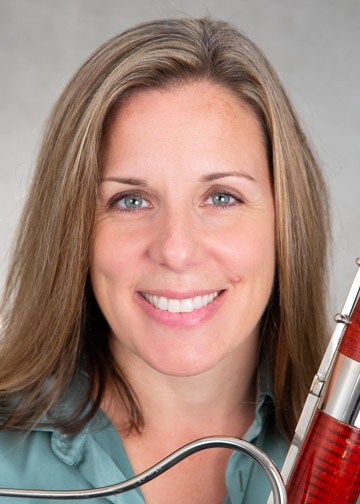 Laura Koepke is Professor of Bassoon at The State University of New York at Fredonia, where she began teaching in 2007. As an orchestral player, she is the principal bassoonist of the Erie Philharmonic and principal bassoonist of the CityMusic Cleveland Chamber Orchestra, where she also performed as concerto soloist in 2014 and 2015. Other solo appearances include concerto performances with the Western New York Chamber Orchestra and the Orchard Park Symphony. Prior to Fredonia, Laura lived in New York City where she enjoyed an active freelance career. She performed numerous concerts with the Orpheus Chamber Orchestra, on European and US tours, and at home in Carnegie Hall and Avery Fisher Hall. She has also performed with orchestras such as the American Composers Orchestra, New York Pops, the Orchestra of St. Luke's, American Symphony Orchestra, Brooklyn Philharmonic, and the New York City Opera. From 1998 to 2009, Laura was a member of the internationally acclaimed woodwind quintet, Quintet of the Americas. Three recordings with the quintet include "Dancing in Columbia" (MSR Classics,) "Karel Husa-Recollections" (New World Records,) and "Sounds of Brazil" (MSR Classics). Laura has performed as a guest artist with Zephyros Winds, North Country Chamber Players, Sequitur, and the Chamber Music Society of Lincoln Center. She has performed at many summer festivals, including the Bard Festival, Bang on a Can, Festival of the Hamptons, Lincoln Center Festival, and with the Chautauqua Symphony. Laura performed as principal bassoonist at the Carmel Bach Festival in 2015 and 2016, and will return as principal bassoonist in 2019. Previous teaching positions include New York University, Manhattan School of Music Pre-college, Aaron Copland School of Music at Queens College, and Western Connecticut State University. Laura graduated from Baldwin-Wallace College/Conservatory of Music, and received the Alumni Achievement Award in 2005. She holds a Master’s Degree and Artist Diploma from the Yale University School of Music.