When unforeseen circumstances arise, such as the cancellation of the remainder of the 2019-20 performing arts season at Fredonia due to the Covid-19 pandemic, it can leave those impacted with a sense of loss.

The Department of Theatre and Dance was hard at work preparing for the final two events of the Walter Gloor Mainstage Series - the Neil Simon musical comedy “Sweet Charity” and the annual Fredonia Dance Ensemble concert. “Sweet Charity” was mere days from opening night.

Students and faculty had been hard at work for months to bring these events to the stage and suddenly the opportunity was taken away.

While the department had no control over the events that led to the cancellation of the season, it did have a say in how to respond. 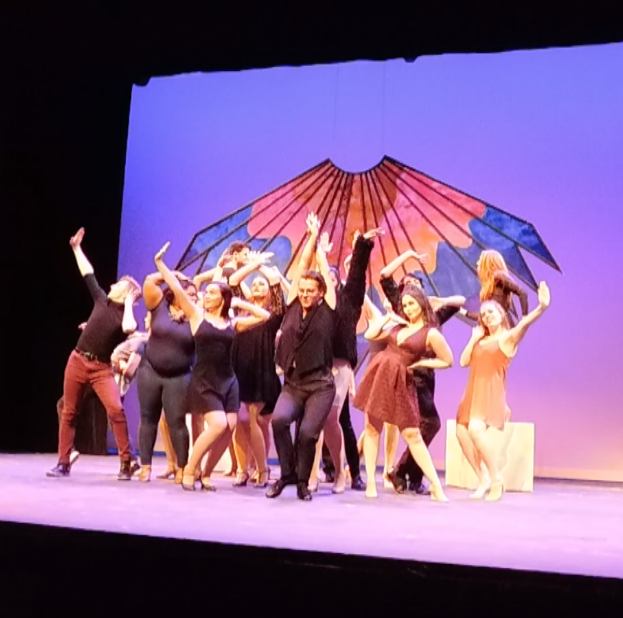 “After seven weeks of wonderful, hard, diligent and joyful rehearsal the news had a significant emotional impact,” said “Sweet Charity” director and faculty member Paul W. Mockovak. “My department stepped up and the working rehearsal to iron out things became a piano only run-through open to the department students, with voice faculty and some others attending.”

James Welch, music director/conductor, led the March 12 performance from the pit, which was raised so the cast could see him.

“I tip my hat and give my deepest bow to production stage manager Jess Mahoney who, on 19 hours notice, took the reins to coordinate with running crews, cast, and production team and set up teams, assistants to be at the ready with scene shifts and the cast for where to go,” Mr. Mockovak said. “It was an extraordinary experience to see faculty colleagues step up to help move scenic pieces, make transitions seamless and give us the sense of what would have been.”

The director said the cast was “exquisite in their professionalism, energy, and focus. Things were indeed at an emotional level, not only because of the one time performance, but also that the next day the department and the campus would be scattering to the wind.”

Mr. Mockovak said the situation also offered a side lesson for the unpredictability of the real world.

“We saw Broadway, regional theatres, companies in our own Western New York go dark and they may not even have had the opportunity for even one showing to an audience,” Mr. Mockovak said. “Now that I have some distance I am very grateful for the one time performance as it has given me a deep sense of closure. I believe it to be the same for the vast majority of the cast. Come August and the new semester this incident will have been five months behind us so not only can we look back on it with a sense of pride and accomplishment, but look forward to continued growth, development, and education of our students.”

As for the Fredonia Dance Ensemble, a video was created featuring the B.F.A. Dance majors in rehearsal excerpts of the choreographic works that were scheduled to be performed in the April concert. The video was shared via the Dance at SUNY Fredonia Facebook page as a thank you to all the choreographers, production crew, and dancers for their hard work on this production.

The department also managed to honor its students before they left for the remainder of the semester. A senior sendoff was held March 13, which included the tradition of signing names on the walls backstage of Marvel Theatre. And in an effort to release pent up emotions, there was a run up “Tin Man Hill” outside of Marvel for a gathering/cathartic shouting session. School of Music honors students with awards and scholarships

Monday May 11, 2020Marketing and Communications staff

The Fredonia School of Music has announced 2020 student awards/scholarships, made possible through endowments established with the Fredonia College Foundation.