Jennifer Cody, a veteran of Broadway, film and television who earned a B.F.A. in Acting at SUNY Fredonia in 1991, has returned to campus as choreographer of “The Wild Party,” the first show of the 2021-2022 Walter Gloor Mainstage Season. 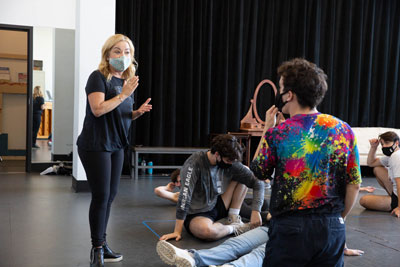 Department of Theatre and Dance Professor Jessica Hillman-McCord, who is directing “The Wild Party,” is thrilled to have Cody work with the performers, “It’s an incredible opportunity for our students to be able to work closely with such a successful industry professional,” Dr. Hillman-McCord said.

After graduation, Cody’s career began in the touring production of “Gypsy.” She began her stage career on Broadway as a replacement in “Cats” in the role of Rumpleteazer. She was also seen in the Broadway productions of “Grease,” “Beauty and the Beast,” “Seussical,” “Urinetown,” “Taboo,” “The Pajama Game” and “Shrek.”

Cody is also known for voicing Charlotte in the 2009 Disney animated feature film, “The Princess and the Frog.” The role earned her an Annie Award for Voice Acting in a Feature Production. Other Disney credits include “Gravity Falls” and “Phineas and Ferb,” among others. She performed in the Rockefeller Arts Center’s 50th anniversary celebration in 2019.

“It’s really cool to challenge students a bit and wonder if they can do it, and then they come back the next day with it learned and knowing they’ve spent time on it...I’m giving whatever I’ve gotten from my years of school back to Fredonia and I love it,” Jennifer Cody

“She is teaching them so much in both classes and rehearsals, demonstrating to the students the kind of professional they should aspire to be,” Hillman-McCord explained. “Her work would be inspirational to them regardless, but the fact that she is a Fredonia alumna demonstrates that her success in such a competitive field is not something impossible for them to achieve. Her choreography is challenging, exciting and dynamic, and will truly enrich this production for audiences as well. It’s not to be missed!”

“My favorite part about working with Mrs. Cody is that she gives us a taste of what the professional world is really like,” said Brandin Smalls, a junior from Ilion. “With the experience we get from SUNY Fredonia and the real-life glance from Jen into the professional world, I think her being here really helps us be prepared for future performances.”

Lauren Teller, a senior from Marilla, admires the flexibility that Cody has in her choreography.  “She allows collaboration with the actors and making a final product with a learning experience that is like no other,” Ms. Teller said.

How receptive Cody is to collaboration and making everyone happy while also “producing and showing the best versions of ourselves” is what Alissa Rojas, a senior from East Meadow, admires.

“It’s really cool to challenge students a bit and wonder if they can do it, and then they come back the next day with it learned and knowing they’ve spent time on it. I said to my husband ‘I think I’m making a difference!’ And that’s exciting! I’m giving whatever I’ve gotten from my years of school back to Fredonia and I love it,” Cody said.

Her residency has been supported by the Williams Visiting Professorship Endowment through the Fredonia College Foundation.