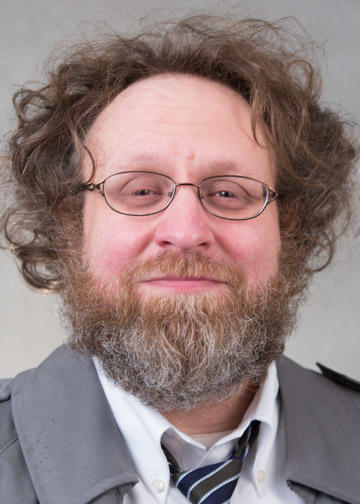 Michael Markham's research is on the music of the early Italian Baroque and on classical music in contemporary culture. He joined The STate University of New York at Fredonia from Stanford University where he was a Mellon Fellow in the Humanities and visiting lecturer in Music and Cultural History from 2006-2008. He received his B.Mus in classical guitar and an M.M. in Musicology from The Peabody Conservatory of The Johns Hopkins University.

In 2001 he received his M.A. and in 2006 his Ph.D. in Musicology from the University of California – Berkeley. His dissertation is entitled The Heritage of Campaspe: Oral Tradition and Giulio Caccini's "Le nuove musiche" (1602). It touches on theories of performance and space in early 17th-Century Italy and the problem of text and Italian solo song in the Renaissance.

In addition to regular courses ranging from the music of Middle Ages to 20th Century Modernism, some of Dr. Markham's more popular seminars at Fredonia include:

Read his chapter "Bach Anxiety: A Meditation on the Future of the Past" now in the book Rethinking Bach published in 2021 by Oxford University Press. Along with chapters appearing in recent books available through The Oxford University Press and Ashgate, his writings on early Baroque performance spaces, on solo song, on Monteverdi and Bach, and on music history pedagogy have appeared in The Cambridge Opera Journal, The Opera Quarterly, Repercussions, Seventeenth-Century Music, and Gli Spazie della Musica. He has twice presented at the annual conference of the American Musicological Society and has given scholarly lectures at the University of Cambridge, Stanford University, The University of California – Berkeley, Stony Brook University, and The University of South Carolina.

He is a regular contributor at the Los Angeles Review of Books and other literary reviews where he supplies essays on the contemporary reception of classical music (available at the following links):

"How About a little Poptimism for Tchaikovsky"
"Broken Sounds/Telephone Bach" (in the Massachusetts Review Online)
"Periscope and the End of Creative Solitude" (in Popmatters)
"Bach Psychology: Gothic, Sublime, or Just Human"
“The New Mythologies: Deep Bach, Saint Mahler, and the Death Chaconne”
“Vivaldi Unbound”
"The Significance of Philip Glass"

"Bach Anxiety: A Meditation on the Future of the Past," in Rethinking Bach, ed. Bettina Varwig (Oxford University Press, 2021)
“Caccini’s Two Bodies: Problems of Text and Space in Early-Baroque Monody,” Gli Spazi della Musica, Vol. 2, No. 1: 33-54
"Caccini's Stages: Identity and Performance Space in the late-cinquecento court," in The Music Room in Early Modern France and Italy: Sound, Space, and Object, eds. Deborah Howard and Laura Moretti (Oxford University Press, 2012), 195-210.
"On Being and Becoming: The First Year of Teaching On the Clock," in The Music History Classroom, ed. James Davis (Ashgate, 2012), 247-67.
"Sarassine's Failure, Campaspe's Lament: Solo Song and the End[s] of Material Reproduction," The Opera Quarterly, Vol. 26, No. 1 (Winter, 2010), 4-41
"Monteverdi, Hero" Review essay of Massimo Ossi, Divining the Oracle and other recent Monteverdi scholarship, Cambridge Opera Journal, Vol. 20 (2008): 111-116
"'The Usefulness of Such Artworks': Expression, Analysis, and Nationalism in 'the Art of Fugue.'"