Throughout the academic year EDP recognizes several of its first-year students as “Featured First Years.” The EDP staff accepts all nominations and selections are based on any special achievements and/or contributions of the nominee. Students’ pictures with their personal reflections of Fredonia and EDP are posted on E 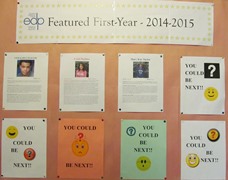 What makes a Featured First Year?