Spotlight to shine on transfer students all week long

The stage is set for National Transfer Student Week to make a big splash at Fredonia.

So, what does this mean to transfer students?

It’s all about getting the word out to help them make a smooth adjustment to Fredonia. “We realize you may not be new to college, but you are new to Fredonia and we are here to help,” said Joshua Croxton, assistant transfer academic advisor.

National Transfer Student Week was developed by the National Institute for the Study of Transfer Students to celebrate students and the professionals who support them on their academic journey. 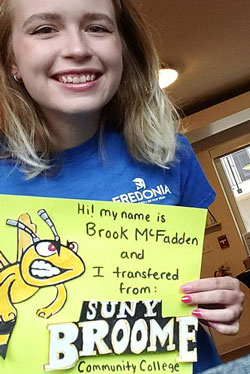 “We’re asking students to send a picture of themselves, holding a sign (or poster) with their name and logo of where they came from or their past school,” explained Ms. McFadden, who joined the Fredonia Tau Sigma chapter last spring and serves as its secretary.

These signs can rise to the level of being works of art. Students are encouraged to wear Fredonia gear, McFadden explained, “to contrast where you came from and where you are now.” Logos of former school can also be included.

Several eboard members have already submitted to Fredonia Faces. It’s already an eclectic collection, with a mix of four-year and community colleges.

Photo submissions will be accepted until Oct. 16 and are to be sent to Mcfa3675@fredonia.edu They’ll be showcased in a collage during National Transfer Student Week.

Tau Sigma, designed to recognize and promote the academic excellence of transfer students, assists transfer students in their transition to Fredonia, so they can make the most of their experience as new Fredonians. It hosts events to introduce transfer students to the campus and available services and to each other.

The bar is set high to join Tau Sigma, with criteria that includes a 3.5 or higher GPA at their previous school, at least one semester under their belt at Fredonia and an invitation from the chapter.

McFadden, who attended SUNY Broome Community College, has been inspired by the academic challenge of becoming a Tau Sigma member. She learned about Tau Sigma and its perks, which also include an academic scholarship awarded every year, at a JumpStart session.

“We’re asking students to send a picture of themselves, holding a sign (or poster) with their name and logo of where they came from or their past school.” - Brook McFadden

“I really wanted to have high standards for myself, to hold myself up to a higher level,” McFadden explained. “Now that I’m at a four-year institution, I wanted to get the best grades,” she added. “I’ve gotten very serious about grades and thought Tau Sigma was a good way for me to set a goal of getting the grades that I wanted, and also being able to show what I did for it.”

Tau Sigma currently has about 64 members and looks forward to expanding its ranks.

Getting to know the Career Development Office will be the focus of the career development workshop on Monday, Oct. 19, from 4 to 5:30 p.m., arranged by the Student Transfer Organization. Back-to-back sessions will be held through Zoom; one introduces services and programs provided by the CDO, the other focuses on interviewing skills used in a virtual format.

Kaitlyn McWhorter and Brooke Strawder are project leaders of the CDO workshop. Students can register in advance for the meeting. After registering, students will receive a confirmation email containing information about joining the meeting. There is no deadline to register for the workshop.

A desire to get to know fellow student transfers spurred Alana Massey, a Business Administration: Management major who attended Ithaca College for a year before relocating to Fredonia, to join the Transfer Student Organization. Meeting new friends can be a challenge during the COVID-19 pandemic, she noted, so joining the group was an easy decision.

“What we’re attempting to do now is make it a balance between social and opportunities to develop professionally, with more hands-on experiential learning,” Massey explained.

“It’s a nice group of people who are willing to help; they’re someone to talk to about anything, whether it’s academic or not.” - Alana Massey

Massey says she is learning new skills through the TSO. She’s receiving experience in marketing by creating promotional flyers and email notices to publicize National Transfer Student Week. “I’ve learned in marketing that deadlines are very important, and they approach very quickly,” she said.

“It’s a nice group of people who are willing to help; they’re someone to talk to about anything, whether it’s academic or not,” adds Massey, the chapter’s vice president. She’s a member of its eboard, which meets every week and funnels new information to the general membership. To welcome students back for the spring semester, the Office of Campus Life has organized several events, capped off by Activities Night on Feb. 1.

Learning how to write computer code from scratch was among several highlights for nearly three dozen area middle and high school students at SUNY Fredonia for Hour of Code, a global initiative that promotes computer science and computer programming during Computer Science Week.