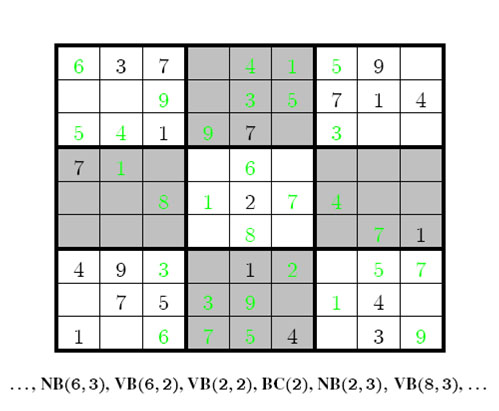 FREDONIA, N.Y.—February 12, 2009—Professor of Mathematical Sciences Joseph Straight and senior Mathematics/Childhood Education major Constance Hadley will be giving an informative presentation on Sudoku Puzzles on Feb. 26 at 7:30 p.m. in Fenton 168. Professor Straight and Hadley are interested in helping students develop their mathematical reasoning and communication skills.
To be included in the presentation is a brief history of the current puzzle craze, Sudoku, followed by a discussion of strategies to solve the puzzles. Professor Straight and Hadley will also share a system of notation that they have created so that players can communicate their moves to other players, or simply to keep a record of how a particular puzzle was solved.
The systematic notation took the two about a month to form. This notation has been explained by Professor Straight by saying “Imagine a class working on a Sudoku puzzle.  At one point, they appear to be stuck, but then Allison exclaims, ‘Eureka, NB(6,3), and then VB(6,2)!’  This is shorthand for ‘If we note the possible positions for the 6 in Block 3, then we can determine the position of the 6 in Block 2.’  The class may then proceed to check Allison's reasoning.”
Professor Straight hopes that “Advanced Sudoku players may be able to teach us a new trick or two and that would be great!”

The International Honor Society Beta Gamma Sigma has recognized scholastic excellence in the world’s top business schools since 1913. The society now welcomes the addition of its newest chapter at Fredonia. Faculty, administrators, students and local residents joined together for the Vigil for Peace on Sunday evening, Nov. 4, to connect the Fredonia community against hate. Biology's Ferguson continuing research on disease with $250,000 grant from the National Science Foundation

Fredonia Biology Associate Professor Scott Ferguson continues his research, aided by a $250,000 Research in Undergraduate Institutions grant from the National Science Foundation. The funding allows him to conduct the three-year research project, “Genetic Analysis of Gurken Translational Control in Drosophila,” that has the potential to assess how humans develop and are affected by disease.