Two radio stations are based at Fredonia: WCVF 88.9 FM, "The Voice," and WDVL 89.5, "The Inferno." WCVF reaches northern Chautauqua County, which consists of roughly 40,000 listeners. This station, managed by students, has a news show that broadcasts Monday through Friday from 6 to 6:30 p.m. Because WCVF is noncommercial, it has no specific format, so student disc jockeys can be more flexible in the music they play. WDVL is also student run and staffed; however, WDVL is a commercial station; a Top 40 format is followed. WCVF's evening newscast is simulcast on WDVL. At both stations, students are shown how to use the equipment properly and instructed on the operational guidelines.  For more informationn, visit http://www.fredoniaradio.com

At this student-run television station, students learn all aspects of how to run a TV station including production, programming and management. Students produce a regular news show, a late night talk show, regular hockey and basketball broadcasts and a host of other student productions. All students involved in the TV station have total 24/7 access to the facility. The station's equipment is state-of-the-art with three Sony HD studio cameras and control room, two Avid and Adobe Premier Macintosh editing suites and field cameras with support equipment. For more informationn, visit https://www.wnyftv.com 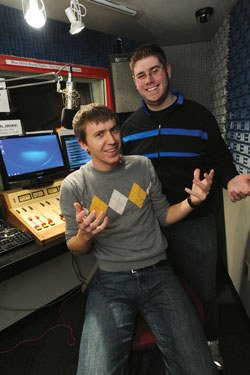