Olivia Connor, who ventured outside of the usual academic convention by pursuing degrees in Biology and Visual Arts and New Media: Drawing and Painting, has landed a unique summer internship that will combine these seemingly distant disciplines: medical illustration.

This summer, Ms. Connor will gain valuable insight into this highly specialized field at Mayfield Brain and Spine Institute, a full-service patient care provider in Cincinnati. 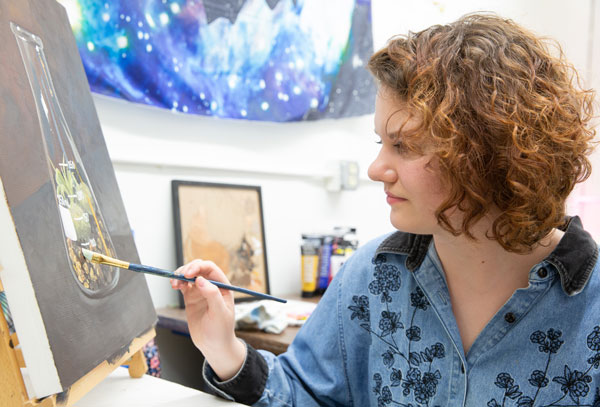 A medical illustration, Connor explained, “is a rendering made by a professional artist who collaborates with scientists in order to turn complicated scientific information into a visual piece that can be more accessible/understandable to others.”

Connor traces her initial interest in medical illustration to a DNA wall poster that was designed by a student majoring scientific illustration at the Rochester Institute of Technology. “The drawings were colorful; it was really graphic,” she remembered. And it suggested to Connor, then in high school and touring prospective colleges, that it might be possible to combine her strong interest and enjoyment of art and biology into one career.

“I would definitely say it’s not unprecedented, but it’s certainly unusual for students to combine art with a science degree,” said Department of Biology Associate Professor Scott Medler. He occasionally comes across students with these shared interests, pointing to a Biology graduate now in optometry school who also studied art at Fredonia, as well as a current dual Chemistry/Ceramics major.

There is a “blurring” of career industries overall, but it’s most evident in a global trend towards blurring the boundaries between artistic practices and methodology used in various research disciplines, said Tracy Collingwood, director of Engagement and Career Development. “Industries that used to be considered separate and disparate, are combining in innovative ways and will be the norm of jobs in the future.”

“Part of what stands out to me about Olivia is her passion and determination to blend these two disciplines,” explained Dr. Medler, who is Connor’s adviser. “I know that it's a rigorous path that requires her to carefully balance the demands and time commitments of both degrees. Over the last several years we have had (Biology) students who have done that, have a minor or major in art,” he added.

But a dual internship, Medler affirmed, is altogether different.

“I expect that this experience will be especially valuable for Olivia, because she will get to see what these professionals do in their daily routines and it will also help her make professional connections,” Medler said. “Our Career Development Office has been very helpful in assisting our Fredonia students in setting up the expectations and contracts for the internships.”

After meeting with Jennifer Wilkins, Fredonia’s internship coordinator, Connor followed through on the guidance and was able to set up a job shadowing experience and informational interview to learn more. That led to being offered an internship.

Biology was Connor’s declared major after graduating from Starpoint Central School in Lockport. Having always enjoyed art classes in high school, Connor started “chipping away” at foundations art courses in her first year. What was initially contemplated as a minor in Visual Art and New Media: Drawing and Painting blossomed into a full-fledged major in Connor’s sophomore year.

At Mayfield, Connor will observe how a medical illustration is created, beginning with the initial request made by an end user. The goal, she explained, is to use background research, photographs to prepare drawings and observations in a physical laboratory to produce a “beautiful anatomical illustration.”

The Mayfield affiliation began with Connor’s father, who works in the medical supply industry. One connection led to another. She met an entire Mayfield team – art director, videographer, grant writers, educators and marketing and business personnel – last summer and did some job shadowing to gain a well-rounded view of the medical illustration field to prepare for the internship.

In fact, the art director who will supervise Connor’s internship is a former president of the Association of Medical Illustrators. Connor anticipates having a front-row seat, even visiting cadaver labs and watching sales reps demonstrate proper use of their tools.

Where are medical/scientific illustrations found? Scientific textbooks and diagrams and illustrations in magazines, as well as informational posters displayed in offices of physicians, dentists or veterinarians are common locations, Medler explained. “They are often essential in communicating an understanding of basic biological processes to non-scientists.”

Within the medical community, an illustration can show proper use of a surgical device in an operating room. “It demonstrates to a surgeon how a tool works in real life, with a real human body,” Connor said.

Photographs can contribute to development of an illustration, but they have their limits so they’re not a substitute for the final product. An illustration allows the artist to emphasize or highlight specific elements or reveal multiple layers, often through the use of different colors, that would otherwise not be visible or distinguishable, Connor noted.

“You can really pinpoint exactly what you want the viewer’s eye to look at, make things sort of pop out more,” Connor explained. Moreover, an illustration can give viewers x-ray vision, so they can see through the anatomy of the body, she added.

Connor will bring extensive illustration experience to the internship, which will serve as her senior capstone. She is the assistant art director of The Leader student newspaper, where she creates illustrations and communicates with the illustration team, and graphic designer for WNYF-TV, creating information graphics for locally produced programs as well as in promotions and posters.

Also in Connor’s portfolio are illustrations she created for Medler in “Transitional Role for Hybrid Skeletal Muscle Fibers in Rat Soleus Development,” an article he submitted to the peer-reviewed Journal of Histochemistry and Cytochemistry.

Educational options after Fredonia are being kept open. Connor, who will receive a B.A. and B.S. at Fredonia, is contemplating an M.A. in Medical Illustration, a highly selective program offered at only a handful of schools.