Department of Geology and Environmental Sciences 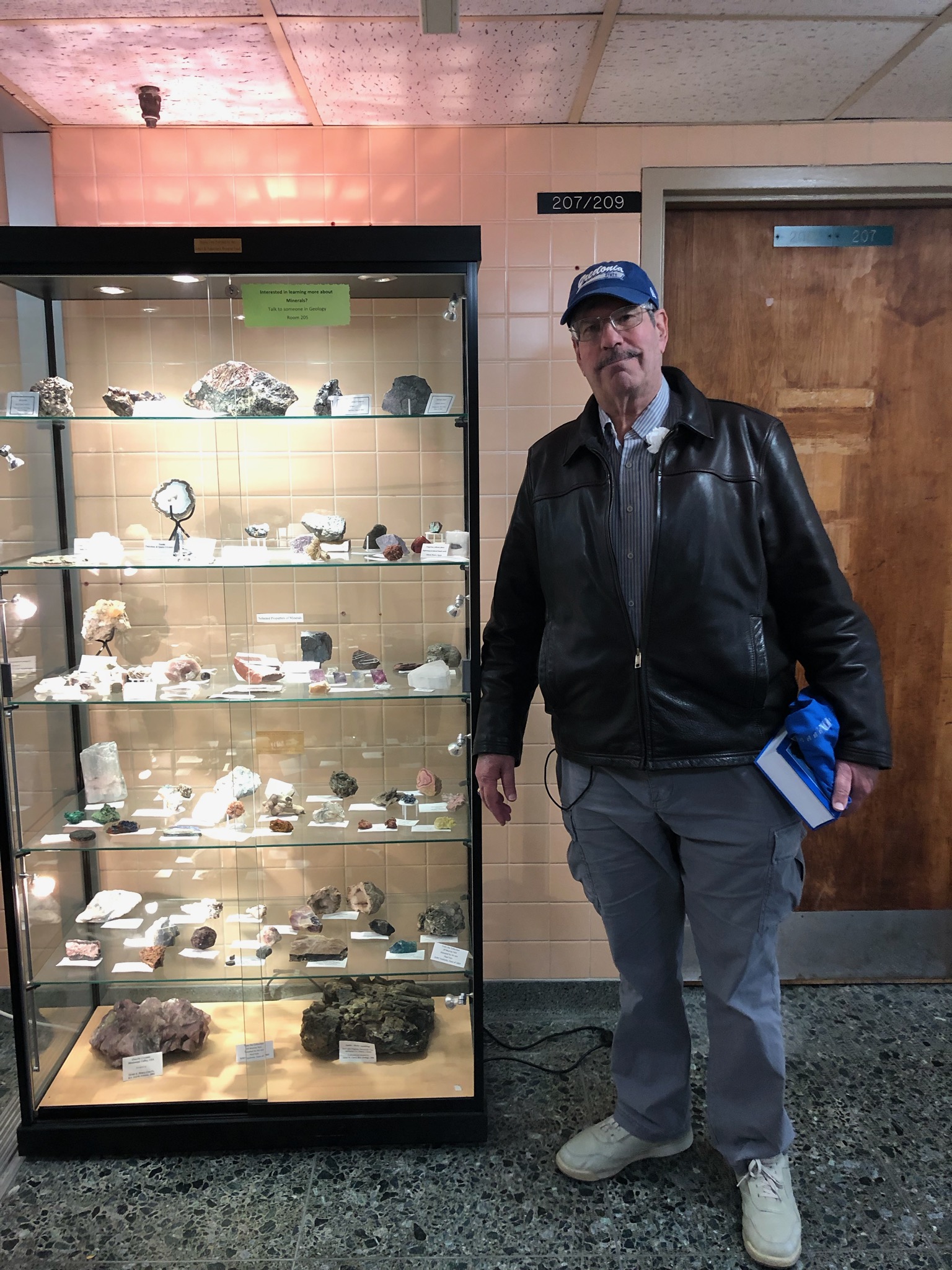 During the homecoming week, several of our alumni visited the department. Pictured is Paul Fein (class of 1969) standing next to a display case that has many minerals donated by him from his father’s collection. We thank our alumni for their continuing support of the department.

We would like to keep in touch with our alumni. If you have changed your contact information, please let us know and we will update it. 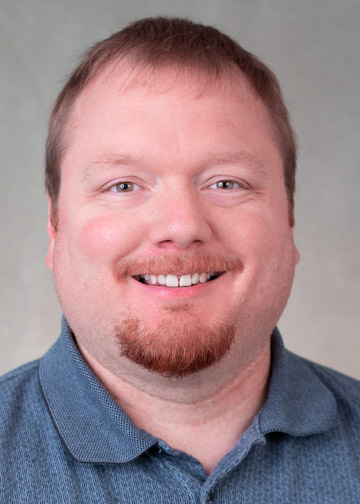 Dr. Thomas Hegna grew up in western Iowa and attended the University of Iowa where he fell in love with invertebrate paleontology. He graduated in the spring of 2004 with honors and high distinction in Geoscience (B.S.) with minors in English and Philosophy. Dr. Hegna stayed at the University of Iowa for his M.S., graduating in the fall of 2006 after completing a project on the systematics and phylogeny of a fauna of upper Cambrian trilobites. He then moved on to Yale University where he completed his thesis on branchiopod crustacean phylogeny and their fossil record in the spring of 2012. He taught at Western Illinois University from the fall of 2011 to the spring of 2019. During the summer of 2019, he and his family made the move to Fredonia. He continues to study both the fossil record of trilobites and early crustaceans. 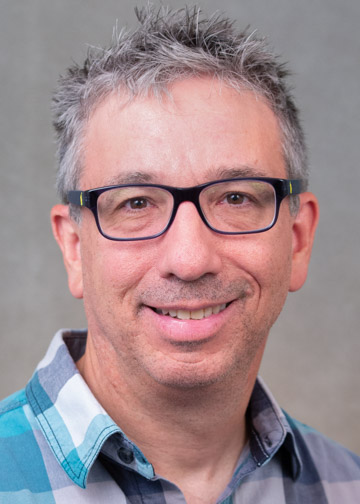 Dr. Matt Purtill is a geoarchaeologist with expertise in archaeology, geomorphology and hydrogeology.  He received his bachelor’s degree from Kent State University, and master degree in Geography and Anthropology from University of Cincinnati. He then moved to West Virginia University for his Ph.D. degree in Geography. He taught at Ball State University in 2017, before joining the department as a lecture in 2018. He continues teaching geomorphology and hydrogeology along with GIS course in the department, as well as establishing a research group in the field. 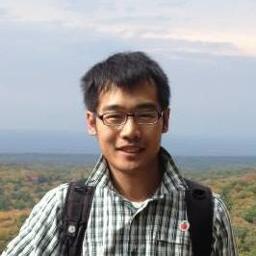 We welcome Dr. Wentao Cao to the department this fall as a Lecturer in Mineralogy and Petrology. He hails from the University of Iowa, where he earned his Ph.D.

His research interests are in tectonics, metamorphic petrology, and structural geology. He has done fieldwork in the eastern Tibetan Plateau, South China and Greenland, among other places.

Dr. Cao has done work in  the partial melting of high-grade metabasites, the development of retrograde textures, metallogenesis, and is interested in the field-based study on regional geology.

This semester, he is teaching Mineralogy (GEO 411) and Minerals and Rocks (GEO 215).

He has already survived his first faculty meeting and is in the throes of organizing the Mineralogy field trip!

She presented her work with Drs. Dalton and Herbert, "A Gassy Earth Makes for Carbon Rebirth: Investigating the Effects of Plate Tectonics on Climate Change by Measuring Seafloor Spreading Rates," at the Leadership Alliance National Symposium. Congratulations, Jamila!

They hail from as far away as Barbados to as close as Brocton and Forestville. Many are freshmen, but some are upperclassmen who have transferred to Fredonia. Some have traveled the world and some are Fredonia athletes. Others are musicians and avid hikers. Some value napping when they can, some are actually morning people and one makes an awesome Tiramisu. Photography, frisbee, biking, boarding, and sports, in general, keep them grounded during their down time. One is mistaken as the relative of a celebrity! 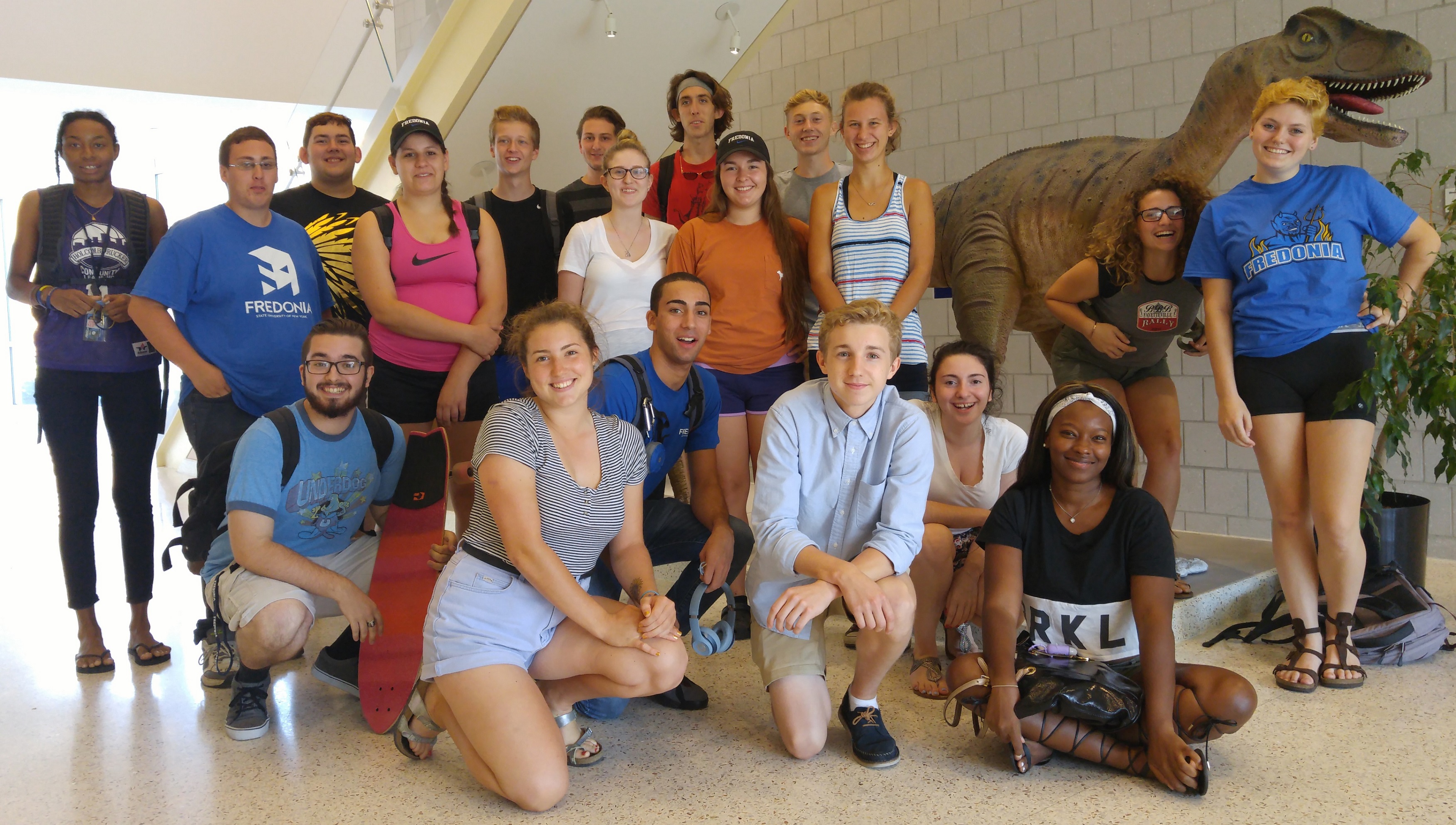 Our incoming students all have a common interest in enjoying the outdoors. We should be able to keep them busy with field trips to meet that interest - from the black shales at Point Gratiot to the vineyards of Portland to green architecture in Buffalo - we all agree... Earth Rocks!

During the 2015 - 2016 academic year, the Department was host to 3 Geophysics students from Brazil. They have now moved on to research positions, but we continue to stay in touch. From left to right: Everaldo Barros Xavier and Caique Pinheiro de Carvalho are digitizing well logs and processing seismic lines in the Applied Geophysics Lab in the Department of Earth & Environmental Sciences at Wright State University. Victor Salles is a research intern with Harvard University's Department of Earth & Planetary Sciences. (Originally posted August 2016) 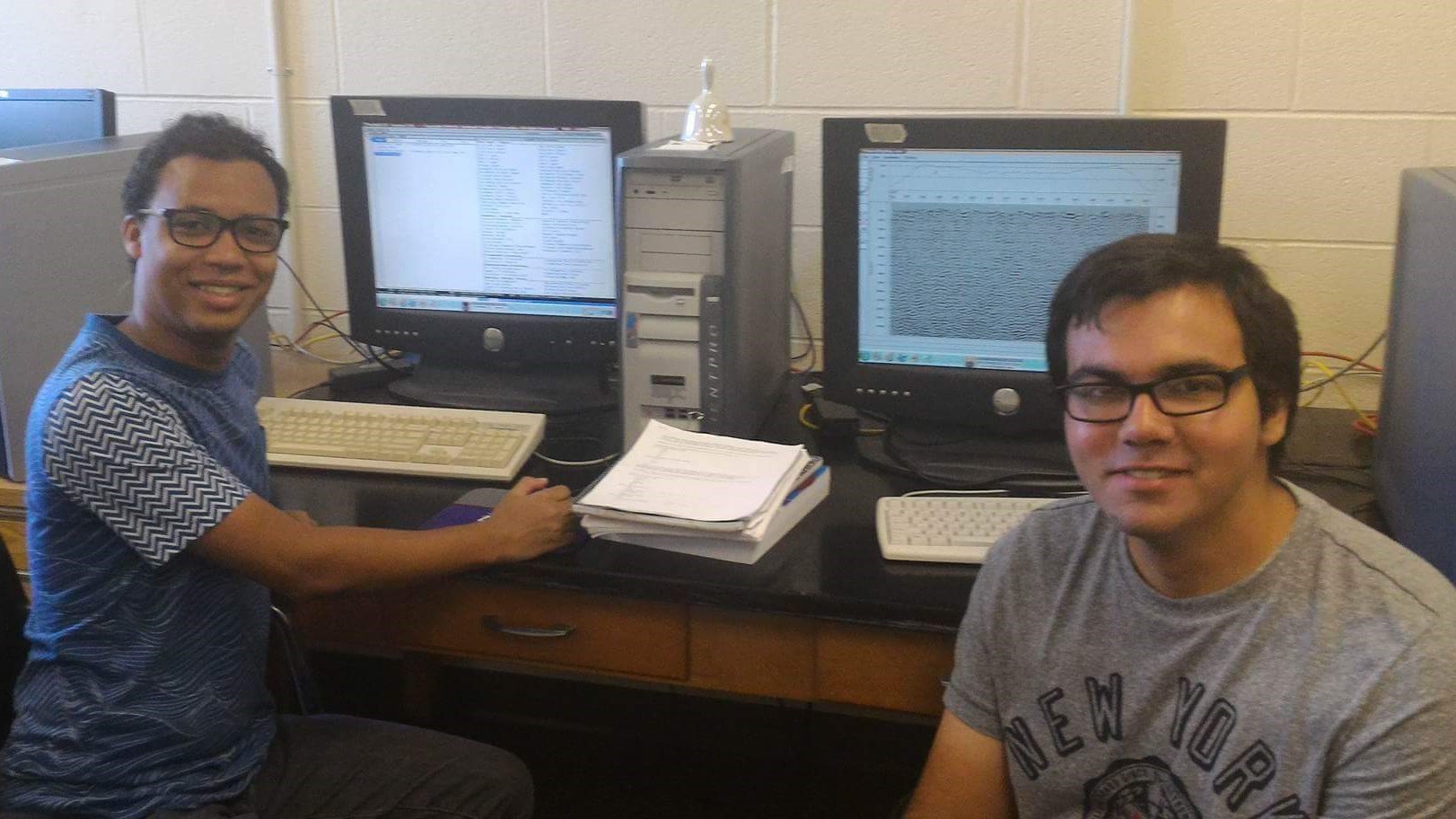 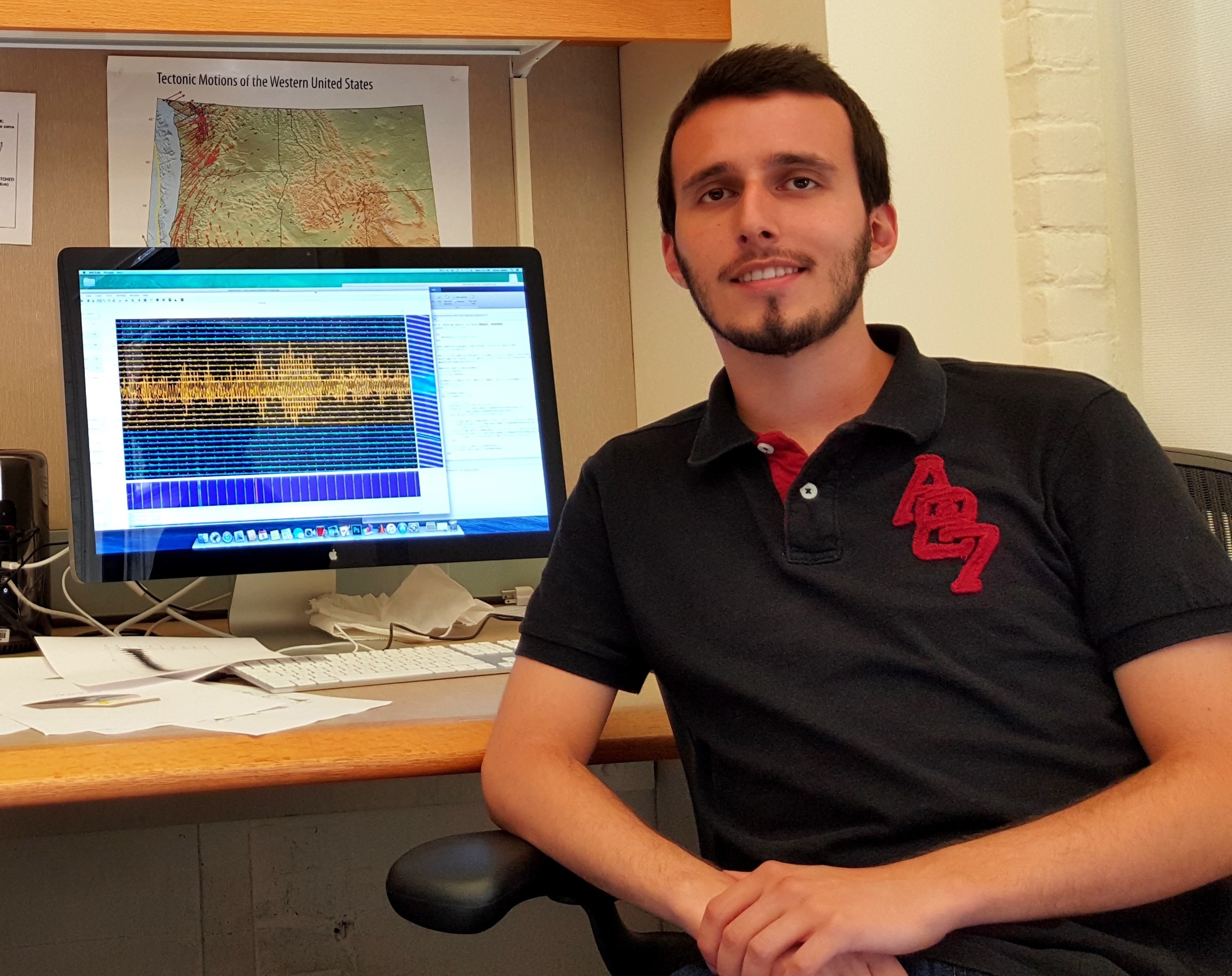 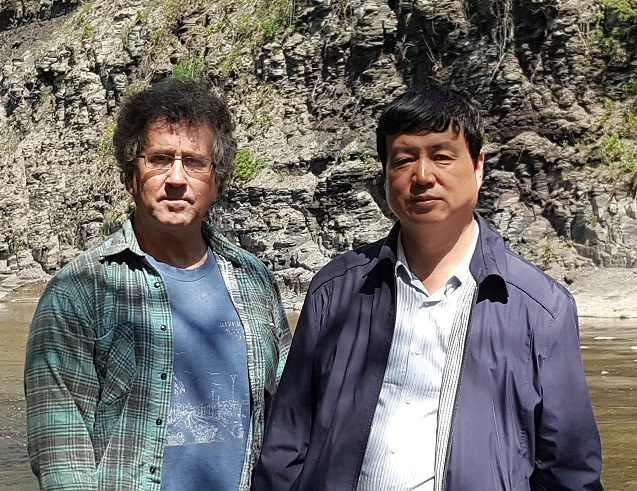 Dr. Gary Lash hosted Dr. Yiwen Ju of the University of Chinese Academy of Science (UCAS) and his colleagues in May to collect samples from the black shale units in western New York for analysis in Beijing. Dr. Ju and his team are interested in similarities between the Middle and Upper Devonian black shale deposits of the Appalachian Basin and basin deposits in China. Dr. Lash has been invited to Beijing as a visiting professor at the UCAS. (Originally posted May 2016) 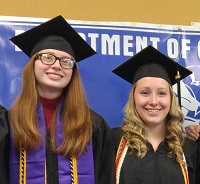 Sierra Kaufman (left) has been accepted into the Ph.D. program in Planetary Geology at Brown University. Brittany O'Brien (right) has received a GSA/ExxonMobil Field Camp Scholar Award and begins work on her graduate degree in Geographic Information Science at the University at Buffalo this Fall. (Originally posted May 2016)