The Chemistry and Biochemistry publishes stories about student and faculty success.

Alum Jeffery Kelly won the Breakthrough Prize for demonstrating that nervous system and heart diseases can be caused by protein clumping-associated toxicity, and for inventing a medication to slow progression of such diseases.

The 2022 Breakthrough Prizes in Fundamental Physics, Life Sciences and Mathematics are recognized as one of the world’s most prestigious science prizes. Kelly’s award, one of three life science prizes announced Thursday, recognizes transformative advances in the understanding of neurological disease. For more information on Jeffery Kelly's  award and research go to https://www.scripps.edu/news-and-events/press-room/2021/20210909-kelly-…

Joshuel Velasco participates in summer research at the Scripps Research Institute in California. 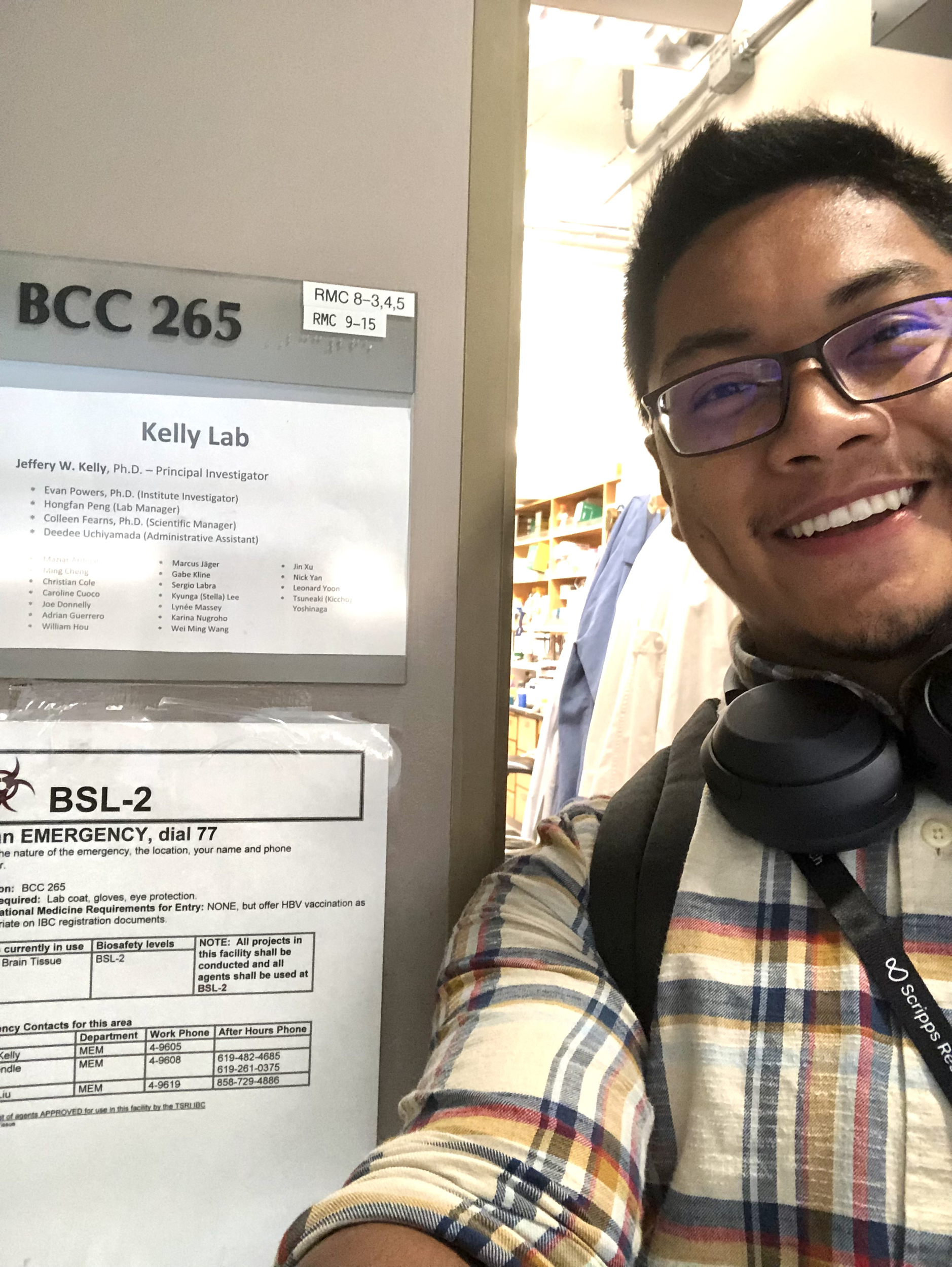 Joshuel worked in Jeffery Kelly's lab where he  synthesized and tested small molecule analogs to better understand their mechanism of action in neurodegenerative diseases. He gained valuable  experience in  working with U251 and HEK 293 cell cultures, Click-Chemistry, SDS-PAGE and Western Blotting to measure autophagic flux. 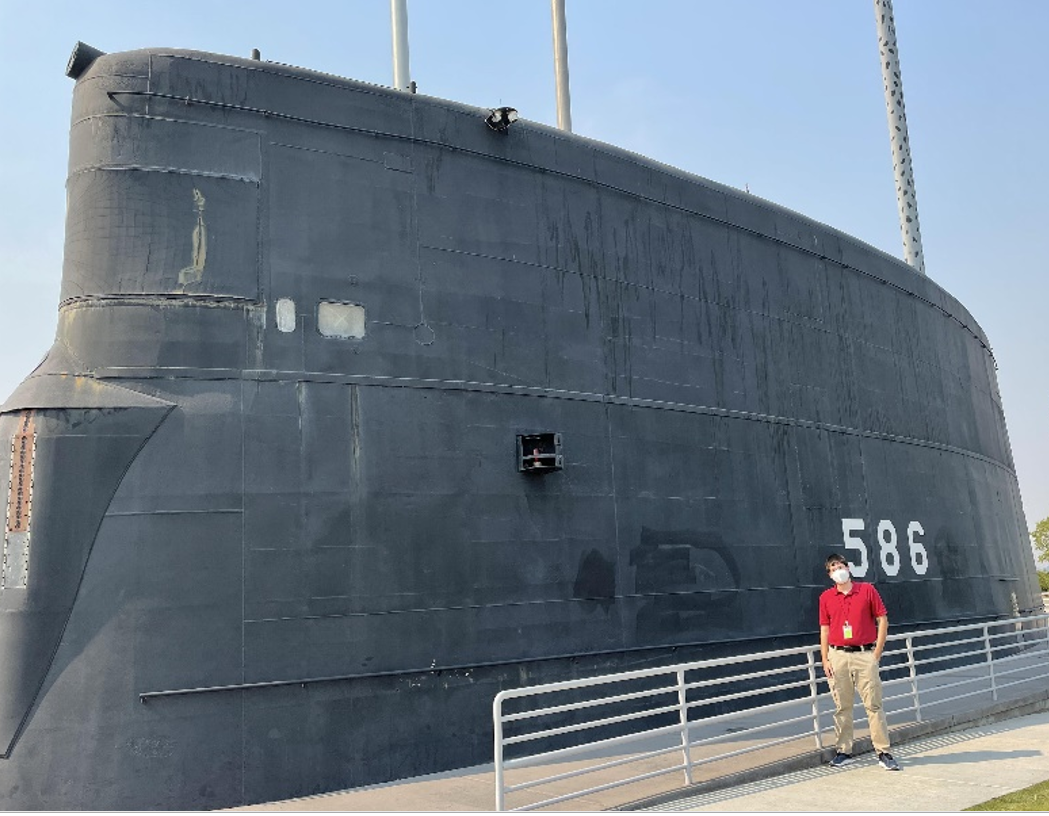 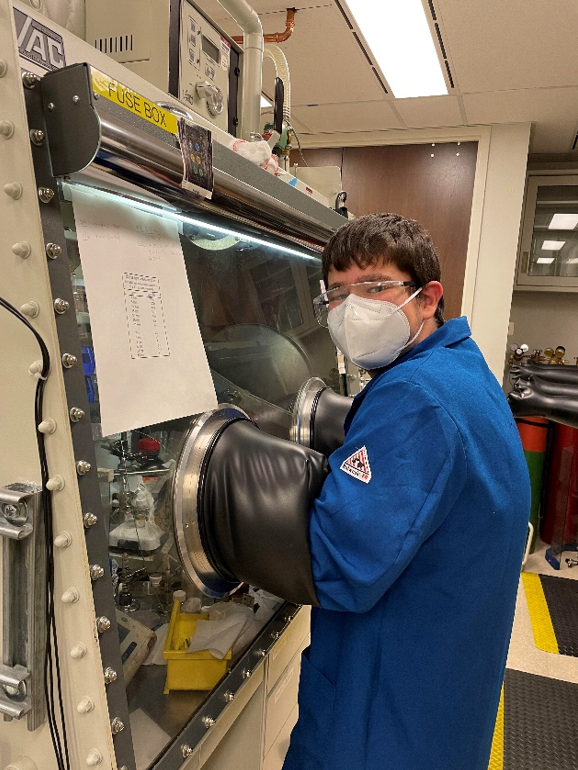 Dr. Allan Jay Cardenas and Brandon Landis participated in Department of Energy (DOE) Visiting Faculty Program (VFP).  The Visiting Faculty Program aims to increase the research competitiveness of faculty and students by providing research opportunities at DOE funded national laboratories. This part summer, Allan and Brandon joined the research group of Dr. Oliver Gutierrez-Tinoco of Pacific Northwest National Laboratory (PNNL) in Richland, Washington.  Their team developed rhodium-based hydrogenation catalyst. Their research results this summer is so promising that a continued collaboration between Dr. Gutierrez and Dr. Cardenas is established.  As part of DOE-VFP, students also participated in workshops and networking activities.  Participating students are given travel and housing allowance, as well at stipend of $600/week.  Allan and his research students are planning to go back at PNNL in summer of 2022. 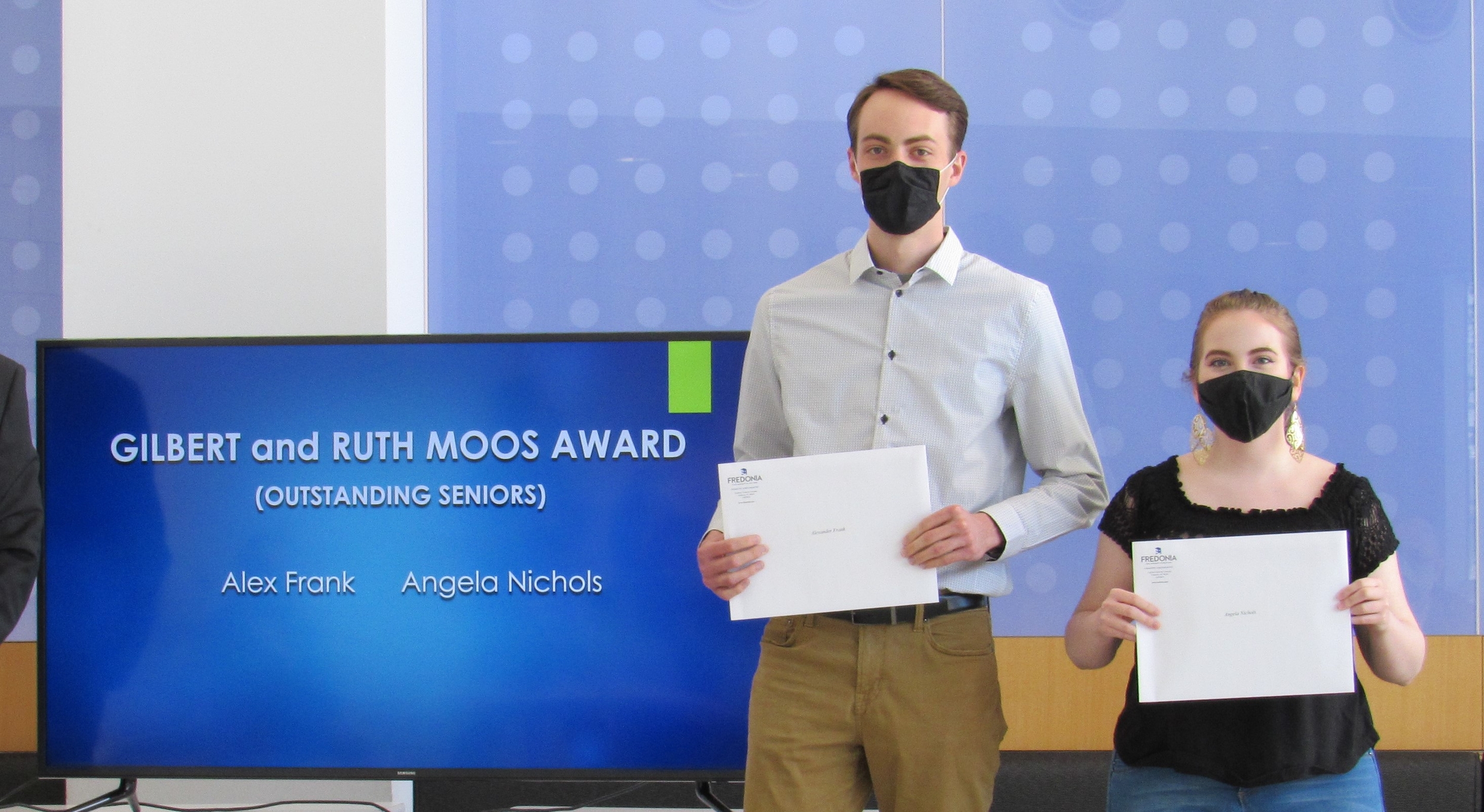 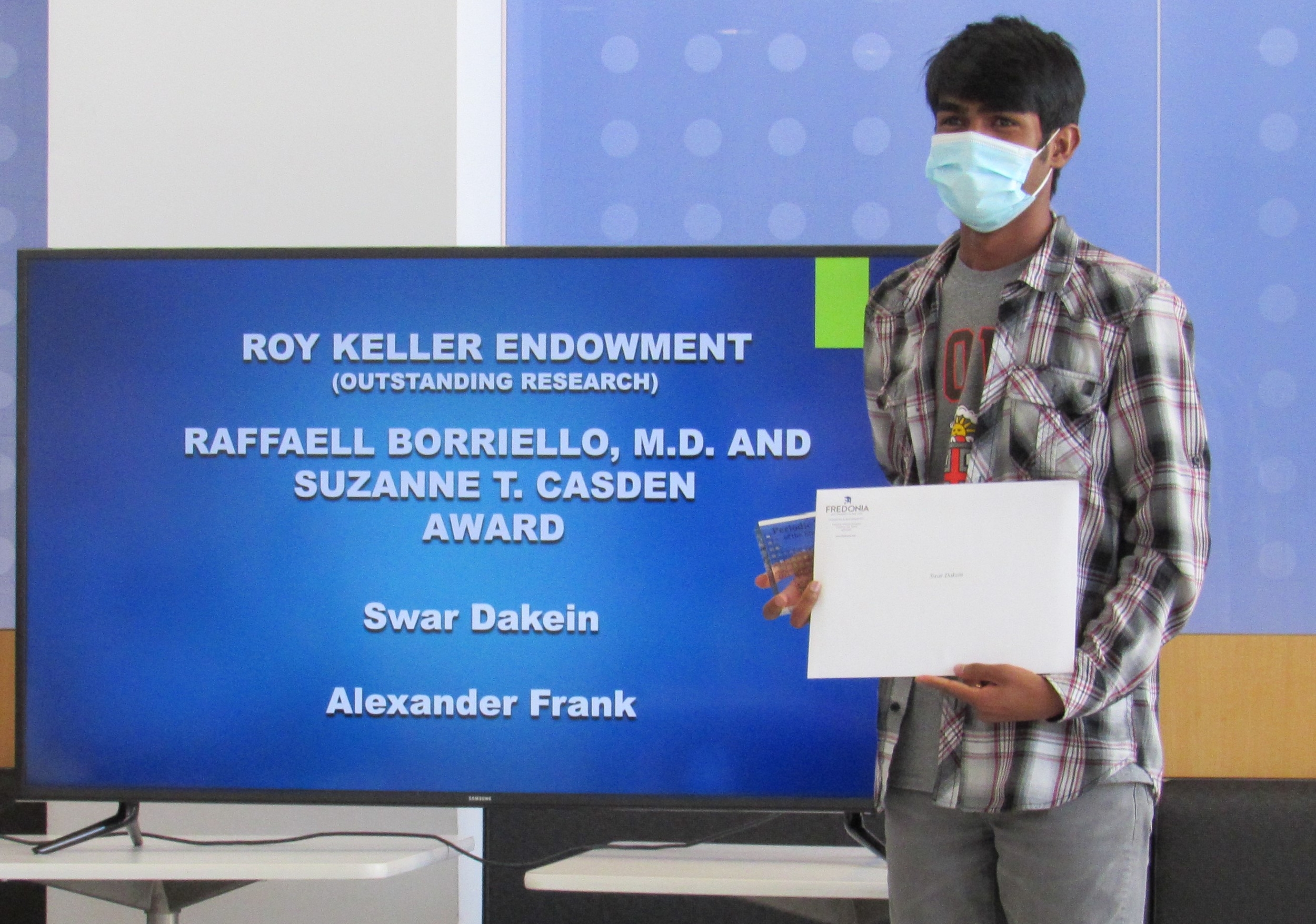 Angela Nichols is going to The Scripps Research Institute, which is ranked 6th in the nation for chemistry.  She will be pursuing her PhD in the area of Medicinal Chemistry.

Alex Frank will be going to the University of California, San Diego which is ranked  20th in the nation.  Alex will be applying his RNA research  experience at Fredonia to study the three dimensional structures of large RNAs at UCSD.

Swar Dakein will be going to Brown University.  Swar did research with Dr. Cardenas and already has a publication.

Bradley J. Brown will be attending  medical school in the fall. 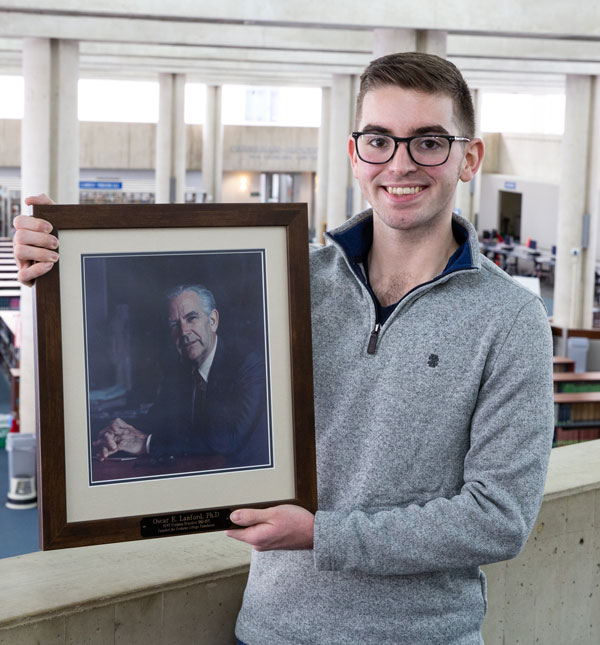 Bradley, a biochemistry  major, will be attending  SUNY Upstate Medical University in the fall.  Bradley also  the recipient  2021 Lanford Presidential Prize. This prize recognizes a graduating senior who has exhibited balanced achievement and exemplified Fredonia’s ideals. High degree of personal honesty and integrity, substantial intellectual growth and exemplary service to SUNY Fredonia, including participation in more than one aspect of university life, are among the criteria for the honor, created and endowed by the late President Emeritus Oscar E. Lanford and Mrs. Lanford. 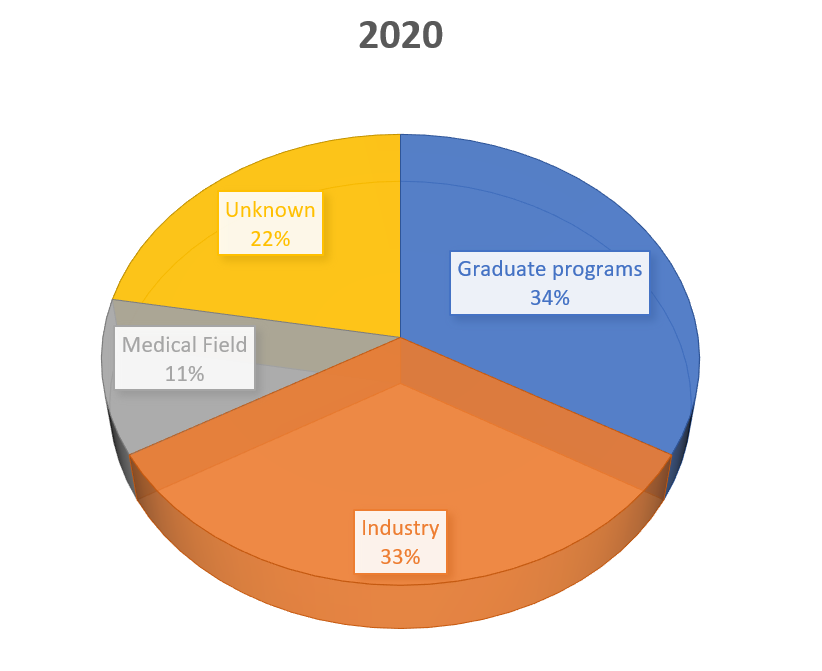 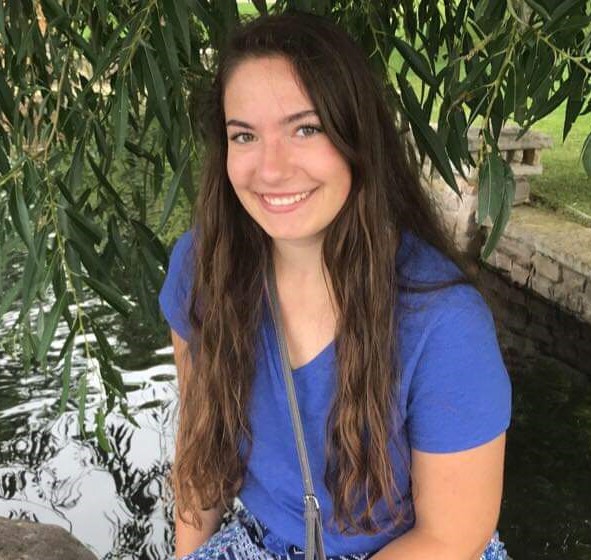 Kaycie Malyk will be attending the University of Rochester in the Fall of 2020. She did research with Dr. Mark Janik on the synthesis and characterization of modified anticancer chalcone analogues.   Kaycie also presented her research at the 2019 WNYACS Undergraduate Research Symposium in Buffalo. 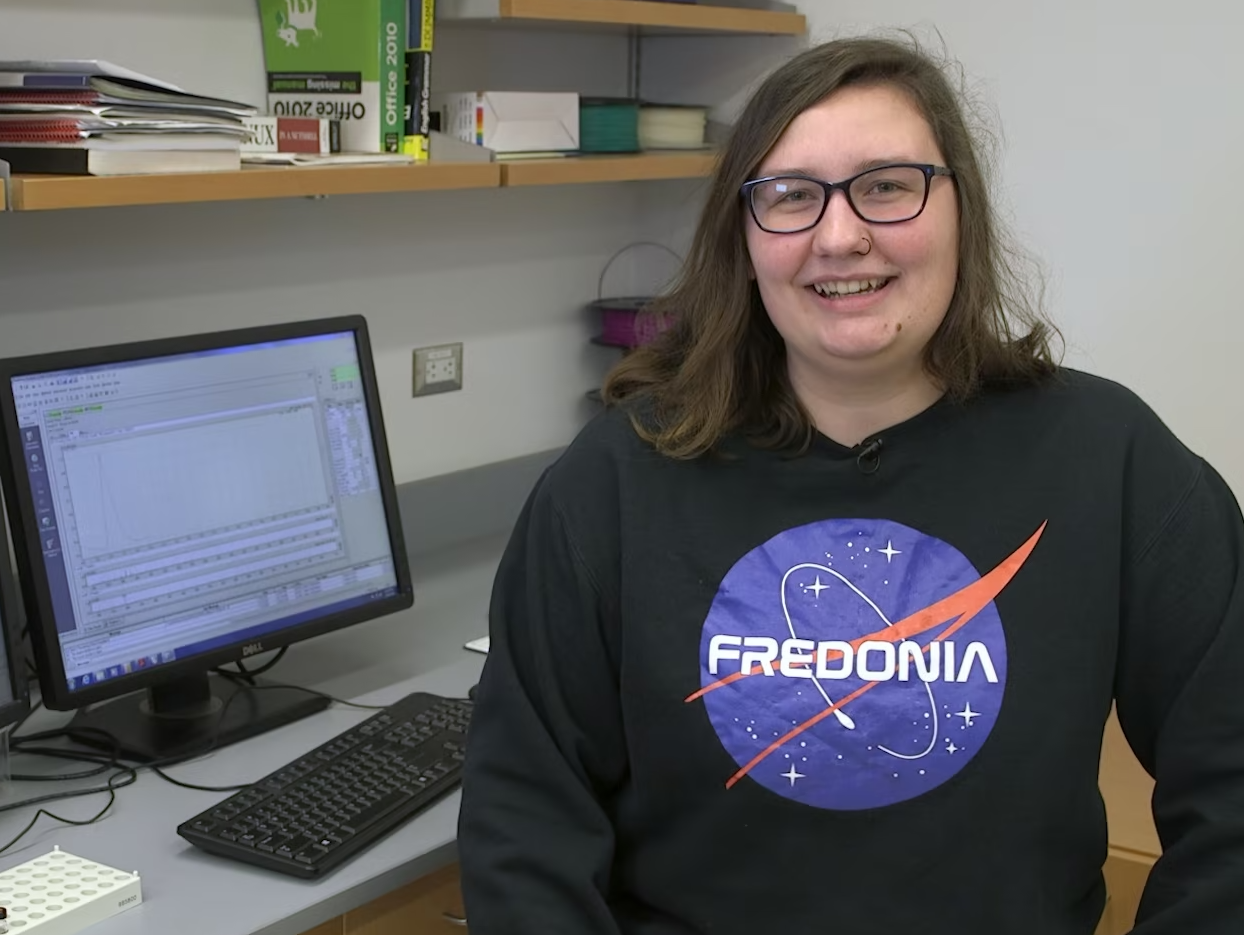 Cordelia Beck-Horton is going to Pennsylvania State University, ranked 20th in the nation, for Chemistry.   Cordelia did research in Dr. Milligan's lab were she used liquid chromatography and mass spectrometry to separate and characterize cannabinoids in CBD. 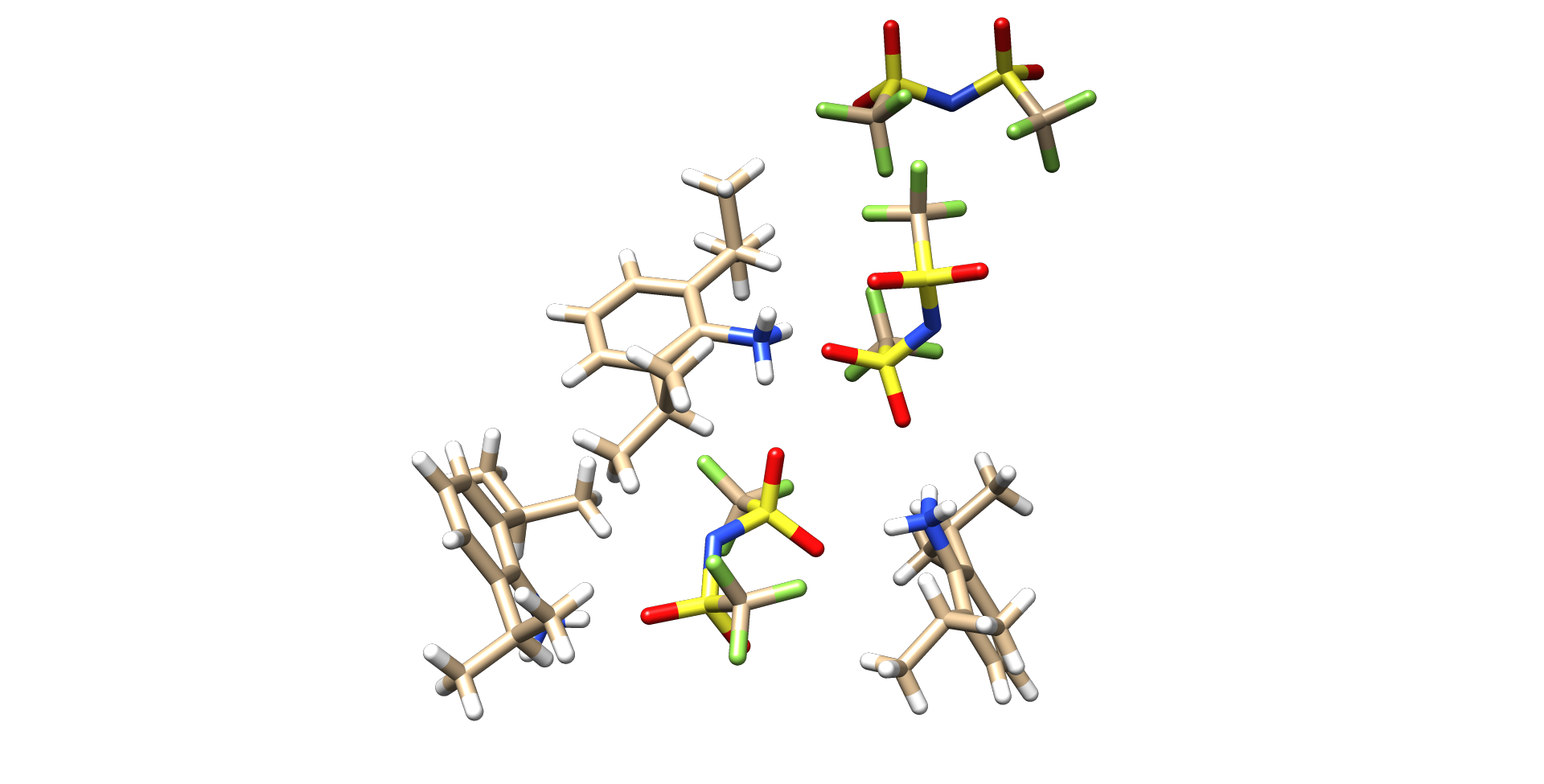 The Applied Crystallography course is a research based course where students receive extensive training on the departments instrumentation. 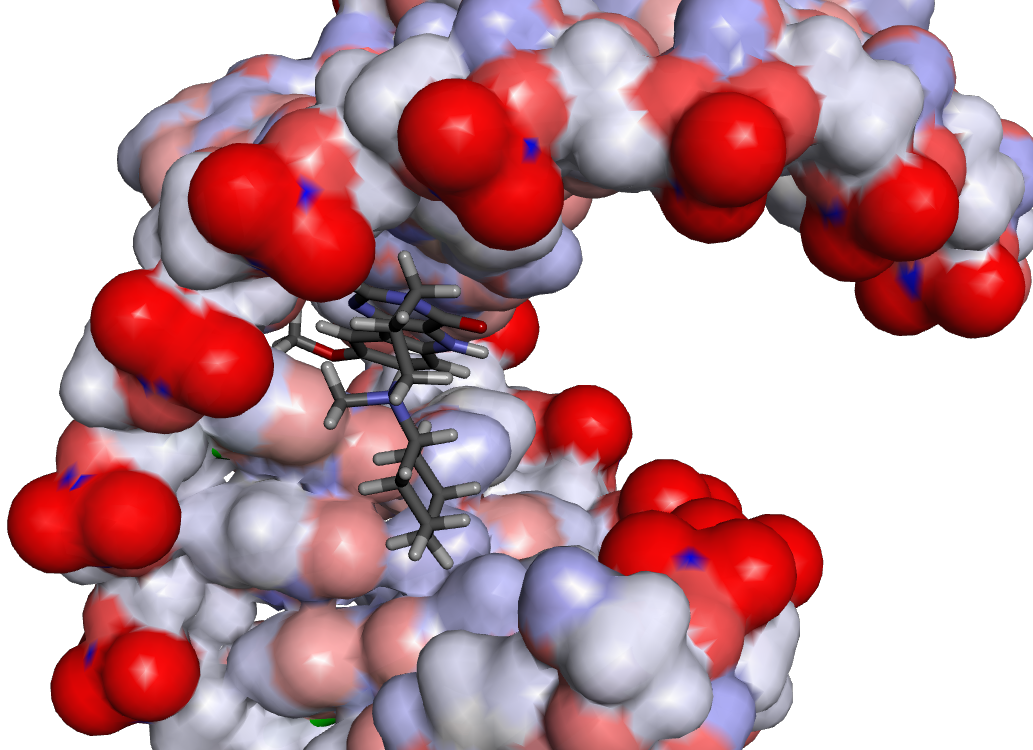 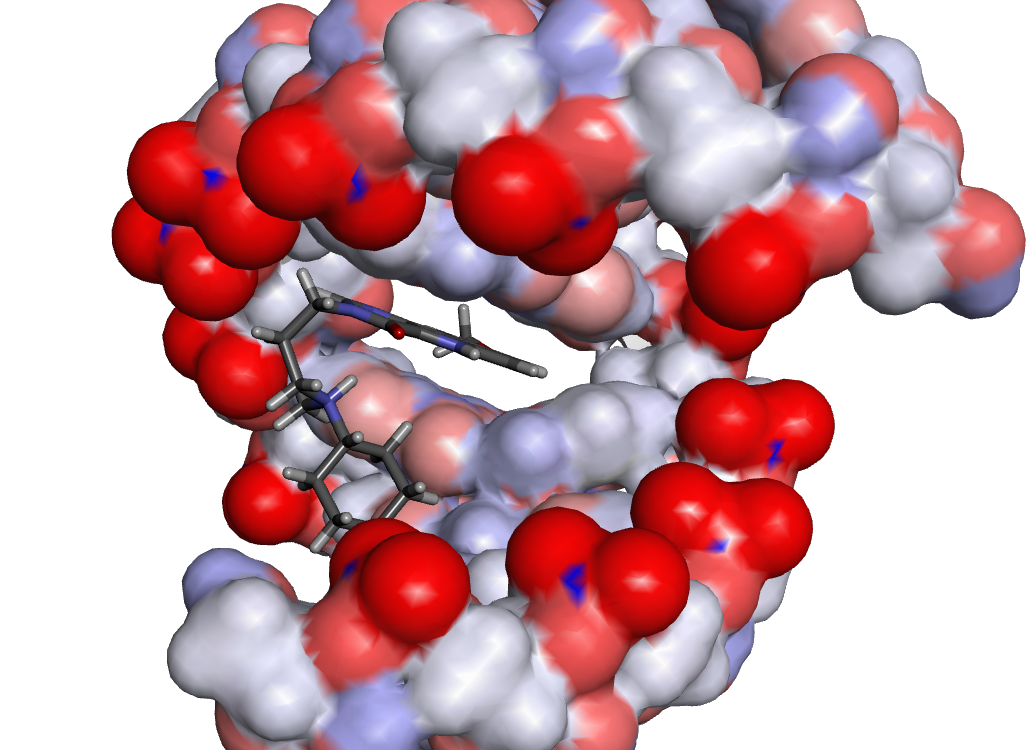 One of four structures determined in the publication. 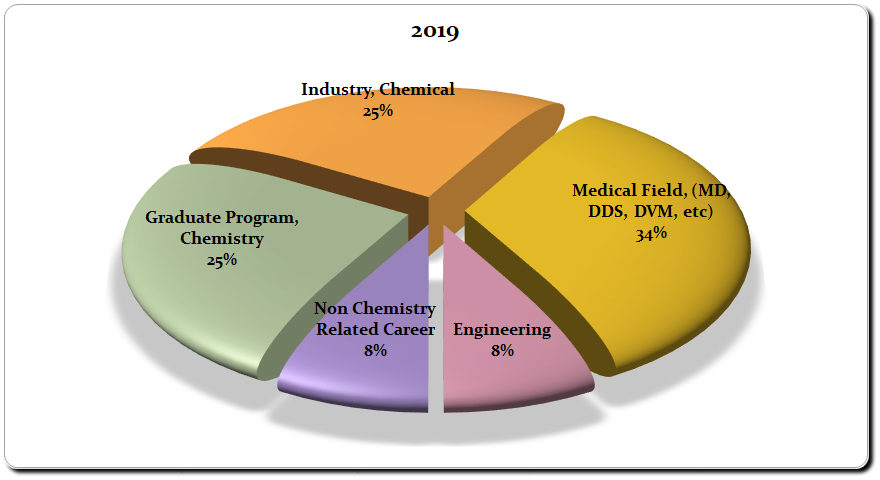 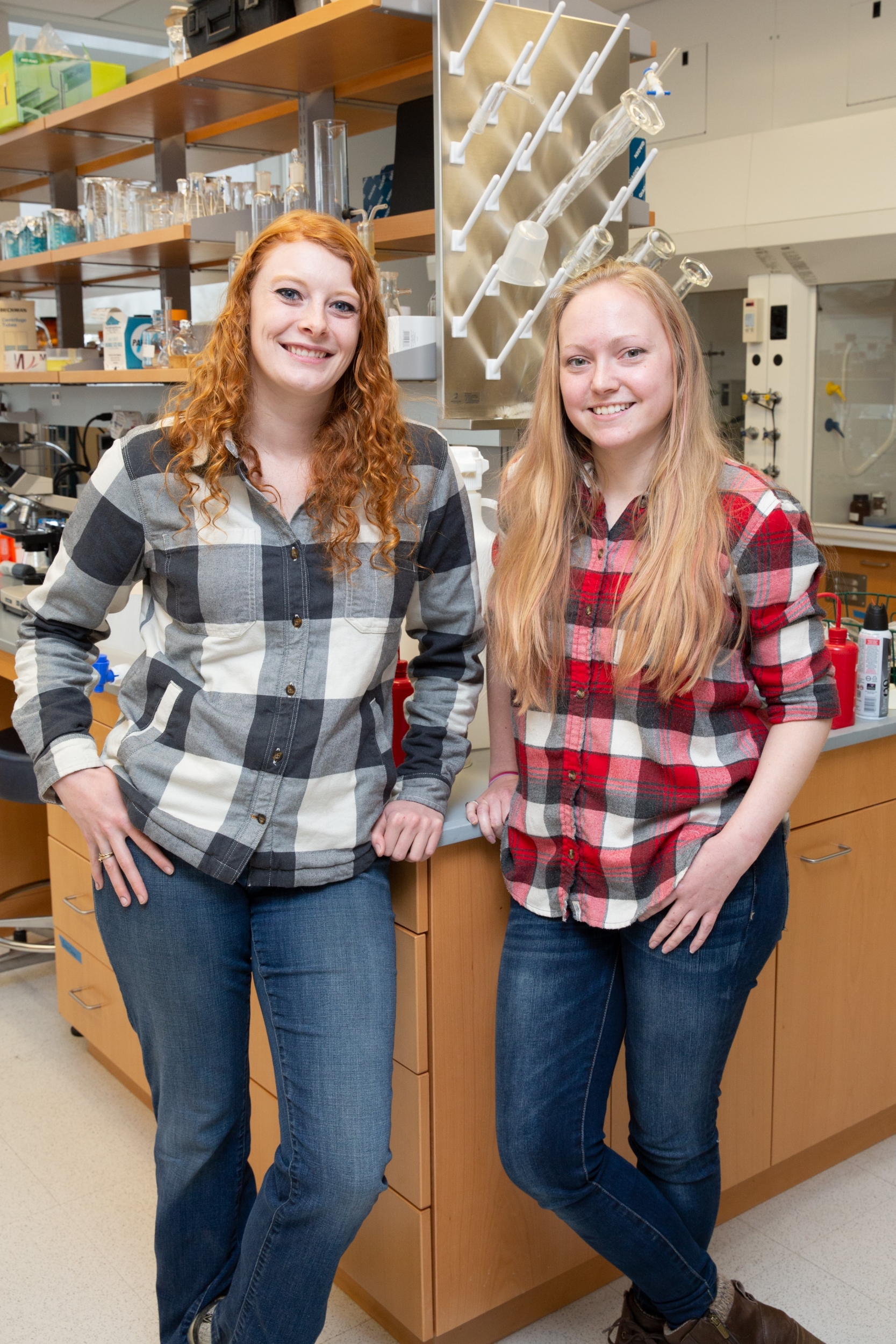 Kevin Aumiller is going to Johns Hopkins for graduate school for cell and molecular biology.   Kevin was a biology major doing biochemical research in Dr. Fountain's lab.  Kevin studied metal ion binding to DNA mismatches using fluorescent spectroscopy, surface plasmon resonance, and MALDI-TOF MS.  He also worked on determining the secondary structure of a 5'UTR RNA strand containing an internal ribosome entry site IRES through a collaboration with Dr. Ferguson's lab in the Biology Department.  The IRES is an RNA element that allows for translation initiation in a cap-independent manner. 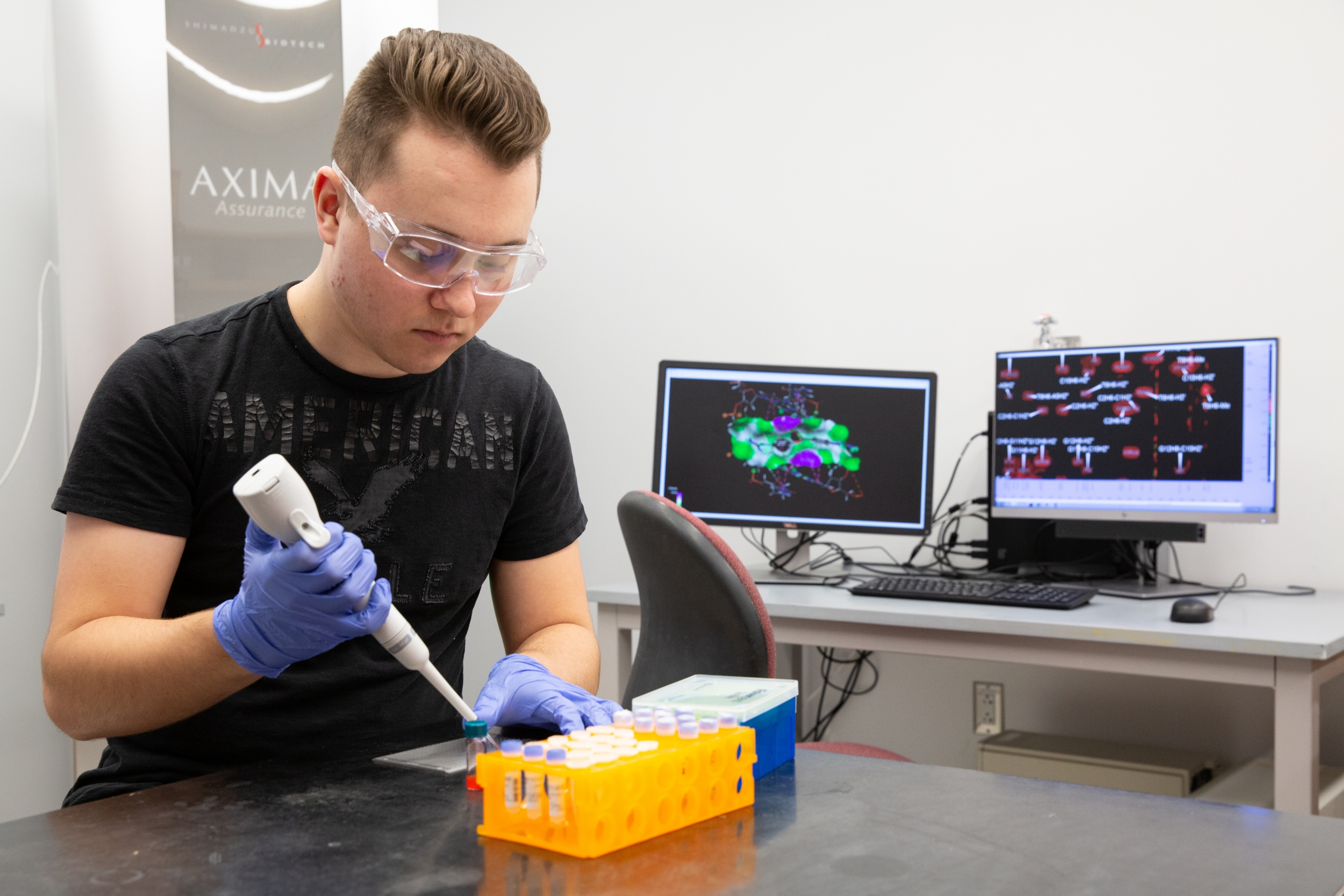 In Dr. Fountain's lab structures completed by Tim Zembryski and structural calculations by Alex Frank were part of a collaborative project with Matthew Disney at the Scripps Research Institute in Florida and researchers at Pfizer Research and Development in Groton, CT.  These structures will be part of a manuscript describing optimization of drug candidates for therapeutic RNA targets. 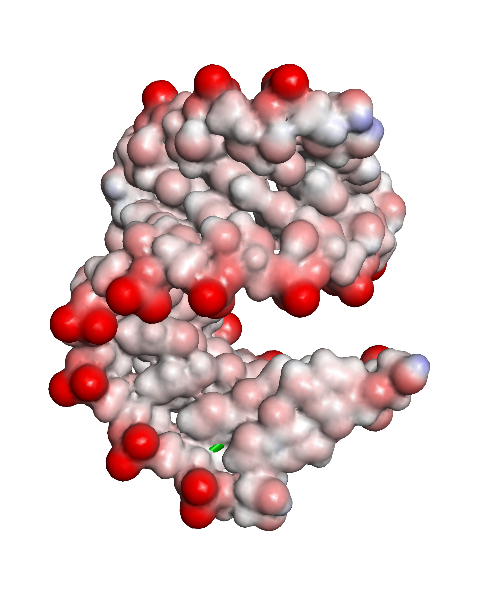 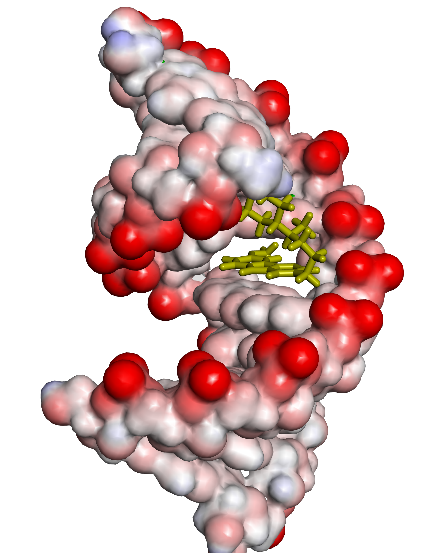 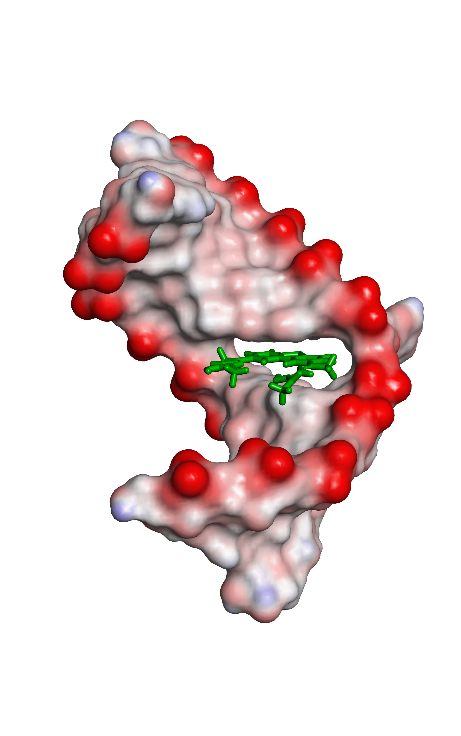 The Department of Chemistry and Biochemistry students were well represented in the 2019 National Science Foundation Research Experience for Undergraduates (NSF-REU) summer programs.  The NSF-REU program is a highly prestigious and competitive program. Kaycie Malyk, a chemistry major, did her REU internship in Duquesne University in Pittsburg PA.  Cordelia Beck-Horton and Jonathan DeMaria did their REU programs in New York State at Cornell University and SUNY at Buffalo.  Alexander Frank was involved in the REU program at the University of Michigan at Ann Arbor.  Jon and Alex are both sophomores and both received  awards to present their REU research at national conferences.

Swar Dakein was hired as a research intern in the lab of Dr. John Richard at the University of Buffalo.  Dr. Richard is one of the top researchers in the field of enzyme chemistry.  Justin Dunlap worked under our own Dr. Michael Milligan.  Justin worked on the collection and analysis of air pollutants using GC-MS.  Angela Nichols also stayed in Fredonia and worked with Dr. Matthew Fountain.  Angela used NMR and structural modeling to determine the structures of three DNA duplexes and did computer modeling of the structure of a DNA triple helix that we will be trying to solve using NMR  next year. 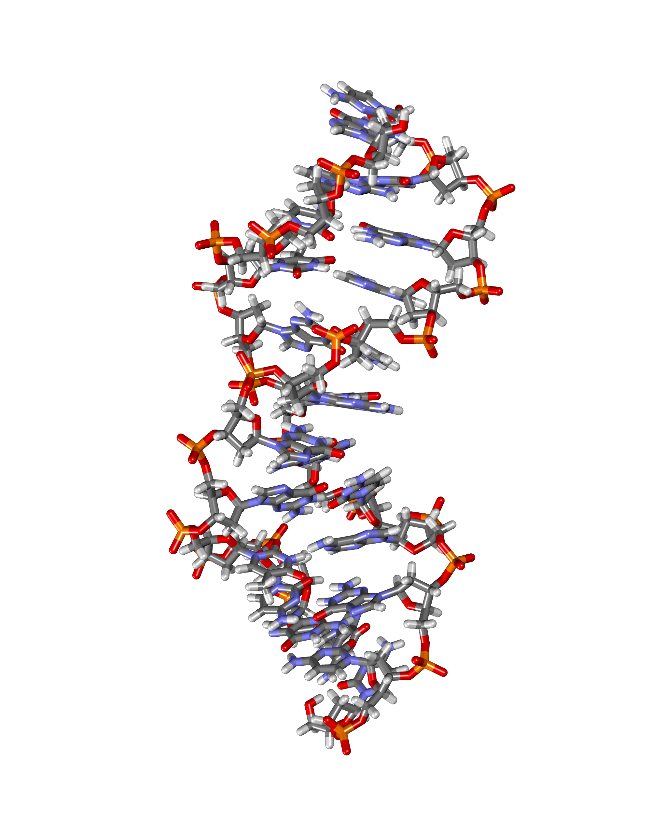 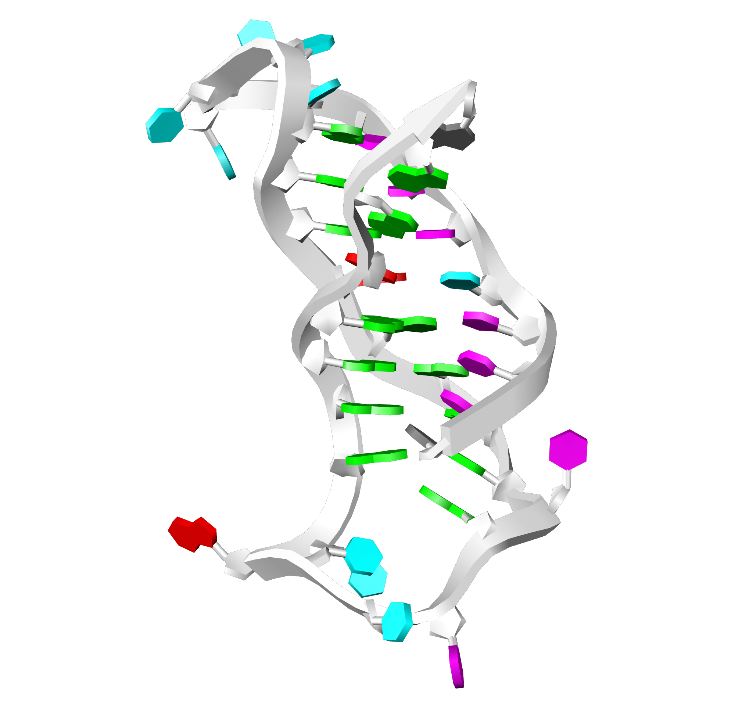 2018 Graduates - what are they doing now 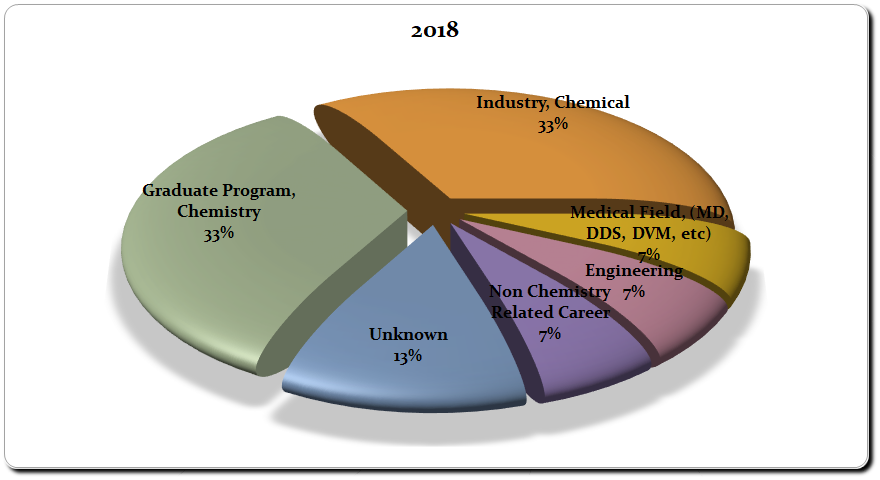 Allan Cardenas and the CHEM 481 Advanced Experimental Chemistry Lab students submit manuscript to the Journal of Molecular Structure for their characterization of merocyanine.

Dr. Milligan publishes article in one of the top journals in environmental chemistry.

Milligan's article with collaborators from SUNY Oswego, Water Science and Technology Directorate of Canada, and Clarkson University titled "Age-Corrected Trends and Toxic Equivalence of PCDD/F and CP-PCBs in Lake Trout and Walleye from the Great Lakes" was recently published in Environmental Science and Technology. This journal is one of highest rated environmental chemistry journals in the country. His work focuses on the quantification of trace amounts of pollutants using gas chromatography and mass spectroscopy.

Dr. Matthew Fountain and Damien VanEtten (BIOLOGY 2017) published a paper with collaborators at The Scripps Research Institute. The paper describes the structure of two toxic RNA triple repeat sequences that are associated with Huntington’s disease and myotonic dystrophy. 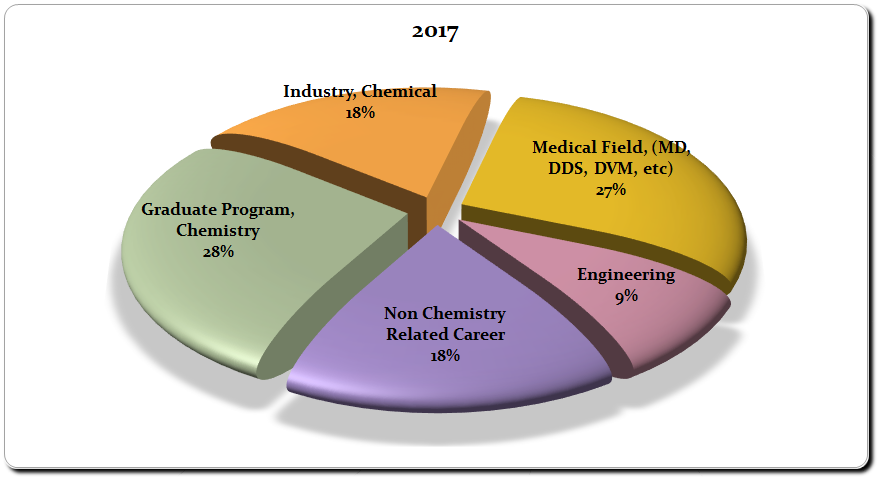 Brett Baker and Brianne Weichbrodt attended and presented their scientific findings at the 254th American Chemical Society (ACS) Fall National Meeting. ACS National meeting is one of the largest gathering of scientific minds from around the globe with at least 10,000 participants and attendees. The theme for the Fall 2017 meeting is Chemistry’s Impact in the Global Economy. It was held at the nation’s capital, Washington D.C on August 20-24.

Brett is senior majoring in chemistry. He presented a poster featuring is on-going study of Synthesis and Characterization of Anilinium Based Ionic Liquids. He aims to relate the structure of the molecule/ion pair to its physical properties such as melting point, viscosity and diffusion. The chemistry of ionic liquid is a fast growing field due to its wide array of application in industry, and energy generation/utilization. Brett also recently awarded the Keller Research award and the Boriello and Casden award as recognition for outstanding undergraduate research.

Brianne is also a senior chemistry major. Her study focuses on the Synthesis and Characterization of Sulfur-Boron Frustrated Lewis Pairs (FLPs). The science of FLPs are relative young and Brianne wants to add more example of FLPs. These FLPs are fascinating molecule that can capture and activate small molecules such as hydrogen gas (H2), carbon dioxide (CO2) and nitric oxide (NO). Applications of FLPs in catalysis, synthesis and even environmental protection is now being developed. Brianne has successfully synthesized a new example of these FLPs which impressed and captivated the attention of many attendees. Last summer, she joined the research group of Dr. John P. Richards at State University of New York at Buffalo (UB) as a summer research intern. She is also a recent recipient of the Frank J. Contanza’s Greenhouse Memorial award which is a testament for her exemplary performance in undergraduate research.

Nine students in the Department of Chemistry and Biochemistry at the State University of New York at Fredonia representing sophomore, junior and senior classes are making an impact in the scientific community one crystal structure at a time.

Their separate lab experiments produced two articles that were published in IUCrData, a peer-reviewed open-access data publication of the International Union of Crystallography. Both dealt with the molecular structure and crystal packing of a compound the students synthesized in their respective undergraduate laboratories.

Fredonia 2016 graduates going to the top graduate programs in the country!

Phillip Frankino, 2016 Biochemistry graduate, is going to the #1 graduate program in molecular biology at Berkeley! Phillip did research in Dr. Ferguson's lab at Fredonia as well and Jeffery Kelly's Lab at The Scripps' Research Institute in San Diego. Pictured is Fredonia Alumnus Michael Marletta (Faculty member at UC Berkeley) and long time supporter of the department with Phillip Frankino.

Robert Schrader, 2016 Chemistry graduate, is going to the #1 graduate program in analytical chemistry at Purdue University in Indiana! Robert did research in Dr. Milligan's Lab (see below).

Jacob “Jake” Garrett, a student of Organic Chemistry Laboratory I (CHEM 225) successfully isolated and recrystallized phenacetin as a part of an experiment in CHEM 225. Using the newly acquired D8 Venture Single Crystal X-ray Diffractometer, he was able to confirm the identity of his compound and moreover he had fun learning X-ray structure determination. The diffractometer is only one of a wide array of analytical and spectroscopic instruments in the department. Students’ training and exposure with these new technologies is a top priority of the Department when it comes to chemical education.

The New York Sea Grant award will be used to conduct a feeding study using plankton extracted from the lake and to conduct a degradation study. The research grant will run from May 1 through April 30, 2018, and will be funded incrementally for a total award of $186,907. 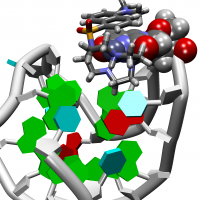