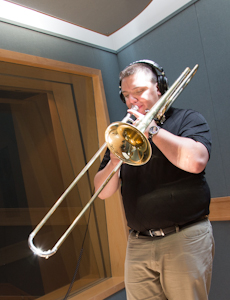 At the Fredonia's School of Music, trombone and euphonium majors work individually, in small groups, and together under the guidance of three studio instructors:

Although each teacher has a primary focus (tenor trombone, bass trombone, or euphonium), each has extensive teaching experience with all three instruments. Lessons are tailored to the individual student's needs, with attention given to healthy tone production, mastery of technical skills, increasing the knowledge of repertoire, and establishing a record of successful performances.

Our graduates have gone on to graduate school at major universities and music schools, are playing in orchestras and in pit orchestras on Broadway, and hold teaching positions in schools throughout the northeast region.

All trombone & euphonium majors participate in Recital Seminar, a weekly class that alternates between “Brass Area Recital” (where all trumpet, horn, trombone, euphonium, and tuba majors meet together) and “Studio Recital” (where trombone and euphonium majors meet with the three studio instructors). This requirement gives music majors many opportunities to perform – in a supportive environment – several times each semester, and to benefit from feedback from all three teachers.

Trombonists have the opportunity to join their peers in weekly rehearsals and occasional performances by the Fredonia Trombone Choir, led by Mr. Carl Mazzio.