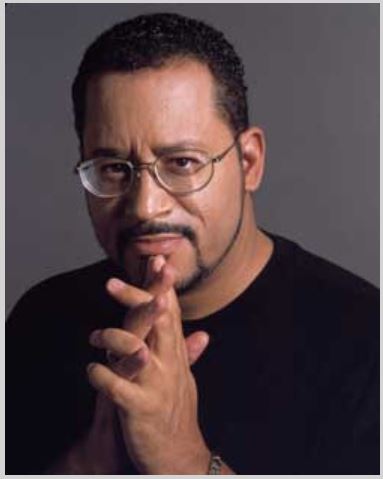 One of the nation’s most inspiring speakers, Dr. Michael Eric Dyson, will deliver the annual Convocation address at SUNY Fredonia on Thursday, Sept. 26, at 3 p.m. at King Concert Hall.

“Once we established our Convocation theme — ‘Raising cultural awareness and building global relations’ — we wanted to find someone who had expertise when it comes to cultural relations and insight into the impact of culture on people’s self-image,” said Dr. Jack Croxton, Convocation Committee chair.

And Dr. Dyson has the credentials and experience, combined with an engaging speaking style, that make him ideally suited to reflect upon those issues.

Dyson has been credited with revitalizing the role of the public intellectual with the fervor of an ordained Baptist minister. A professor of Sociology at Georgetown University, Dyson bridges gaps between generations by connecting civil rights identity to hip-hop culture, while forging links between older and younger Americans, especially black Americans.

“This will be a major event for the college; he is very well known as a social critic and makes regular appearances on the major news channels, such as NPR, CNN and MSNBC,” Dr. Croxton added. “He’s had a lot of visibility for a number of years.”

As a cutting-edge historian, Dyson educates audiences on the significance of hip hop, not only in understanding black culture, but in American culture as well. With his powerful voice, he reaches beyond race, addressing the universal commonality of American concern. He infuses intellectual thought with popular culture, while focusing on topics of interest to the public. He eloquently melds scholarly insight with the phenomena of contemporary culture, emphasizing their interconnectedness and force in shaping society.

Dyson has appeared on The Today Show, Nightline, O’Reilly Factor, The Tavis Smiley Show and Real Time with Bill Maher, among other programs. He has cemented his star appeal on such shows as Rap City, Def Poetry Jam, and The Colbert Report. Dyson is also a contributing editor of Time magazine. In addition, he hosts an hour-long news and talk program on NPR, “The Michael Eric Dyson Show,” where he delivers thoughtful analysis of today’s biggest stories from pop culture to race relations.

An American Book Award recipient, Dyson has been described as one of the most graceful and lucid intellectuals writing on race and politics today. It has been said that he is reshaping what it means to be a public intellectual by becoming the most visible black academic of his time.

Ebony magazine has named Dyson, author of 16 books, one of the most influential black Americans. His books provide some of the most significant commentary on modern social and intellectual thought, interwoven with a combination of cultural criticism, race theory, religion, philosophical reflection and gender studies.

Works such as Making Malcolm X; I May Not Get There with You; Holler if You Hear Me; Mercy, Mercy Me: The Art, Loves and Demons of Marvin Gaye; Is Bill Cosby Right? Or Has the Black Middle Class Lost Its Mind?; Come Hell or High Water: Hurricane Katrina and the Color of Disaster; and the recent Can You Hear Me Now? The Inspiration, Wisdom, and Insight of Michael Eric Dyson deeply probe social themes and cultural politics.

In addition to his appearance at King Concert Hall, Dyson will also have opportunities to meet with student leaders and Honors students, as well as the university’s new chief diversity officer, Center for Multicultural Affairs director, and other administrators.

Funding for the Convocation speaker is provided by the Maytum Lecture Endowment and the Williams Visiting Professorship Endowment through the Fredonia College Foundation.