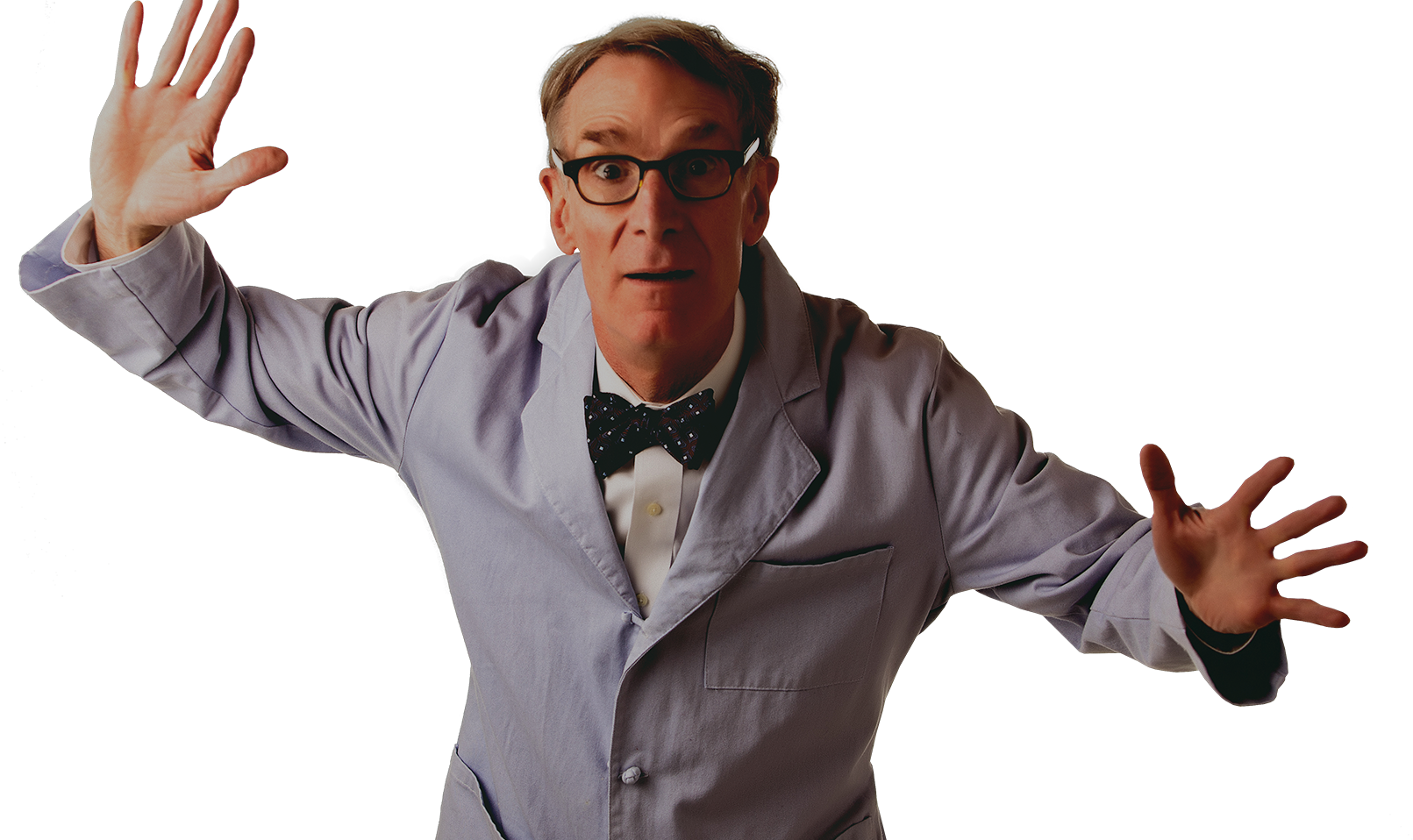 The Convocation Committee is pleased to welcome Bill Nye as this year’s keynote speaker. He is best known for his popular TV show, “Bill Nye the Science Guy,” for which he won seven Emmy awards for writing, performing, and producing. He is the host of three currently TV series, “The 100 Greatest Discoveries,” airing on the Science Channel; “Eyes of the Nye,” airing on PBS; and his most current project, “Stuff Happens,” which airs on Planet Green and focuses on environmentally responsible choices that consumers can make. For the last few years he has served as the Vice President of the Planetary Society and is currently serving as Executive Director of the society, which is considered to be the world’s largest space-interest group.

A short video featuring Bill Nye speaking on the topic of the joy of discovery can be found at:http://youtu.be/p0_YHVFoXkM

Voyages of Discovery: Finding family and self in film

"The Golden Door” is about Italian immigrants from Sicily at the beginning of the 20th century who moved to the United States for better opportunities and a better life. A father, two sons, and a grandmother decide to leave their own land for a journey full of unknowns and difficulties, a trip shared by many other immigrants from many different countries.

“Like Water for Chocolate” is based on the best-selling novel by Laura Esquival, this internationally popular romantic fable from Mexico centers on a young woman who discovers that her cooking has magical effects.

“Wadjda” is a current exploration about the interplay of family, religion and self-discovery. It follows the title character, a young Saudi girl as she decides to enter a Koran competition to earn the money to buy a bicycle.  Both things are quite uncommon and perhaps even forbidden for girls, so Wadjda is required to discover her own strength to accomplish these tasks even as she learns more about her family.

Event Organizers: KimMarie Cole, Department of English, and Chiara De Santi, Department of Modern Languages and Literatures, on behalf of the Cross-cultural Renga

The fall colloquium invites graduate students to take part in the annual Convocation and make connections between their individual scholarly interests and the Convocation theme, “Joy of Discovery.”

Organized by Karry Kazial and the Graduate Studies Council

Participants will take the FOCUS 2 and Myers-Briggs career assessments prior to the event, and then will take part in a series of fun and interactive activities that will both explain their assessment results and start them on the path to discovering their career.  Students who are seeking a major, want to change their major, or are looking for career options, will get insights that will help them make good career decisions.  Participants must register and complete both assessments by September 26.

The Office of Diversity, Equity, and Inclusion and the Women’s and Gender Studies Program will be screening the film Trans: The Movie. Trans is a documentary feature film (released in 2012, 93 mins) that provides an up-close and personal journey into the lives of a range of contemporary transgender persons. A trailer for the film can be viewed via the following link: http://transthemovie.com/about/. Transgender is an umbrella term that typically refers to any
person who does not identify with the gender they were assigned at birth, and therefore transgresses gender norms.

The film will followed by a panel discussion. Light refreshments will be available

About the Performer: Michael Colgrass is truly a renaissance man. He began his musical career as a Chicago jazz drummer and quickly progressed to the rigorous life of a New York City free-lance artist (developing new musical instruments and advising Leonard Bernstein as to the orchestration of percussion parts to West Side Story, to name a few seminal influences). In subsequent years he has gone on to win the 1978 Pulitzer Prize for Music for Déjà vu, which was commissioned and premiered by the New York Philharmonic; an Emmy Award in 1982 for a PBS documentary “Soundings: The Music of Michael Colgrass;” two Guggenheim Fellowships; a Rockefeller Grant; First Prize in the Barlow and Sudler International Wind Ensemble Competitions; and the 1988 Jules Leger Prize for Chamber Music.

These exercises are for public speakers, managerial people, instrumentalists, & singers who need to communicate persuasively with groups. Exercises include anchoring confidence with a simple touch, stepping in front of people with comfort and ease and establishing your personal circle of excellence, includes how to deal with stage fright, concentrate under pressure and perform at your best.

Life Levels Alignment is a spatial exercise showing you how to align your primary activity with your capabilities, your values, your identity and your spiritual self—all in relation to your environment. This exercise helps people focus priorities and even make career decisions.

Winds of Nagual by Michael Colgrass will be performed on the Wind Ensemble concert: October 25, 8:00 pm, King Concert Hall

Event Organizer: Dr. Kay Stonefelt and the School of Music

To experience first-hand joyful discovery in natural spaces is a wonder to be celebrated.  Maintaining both the spaces and their joyful discovery requires creativity and engagement from a wide-range of stakeholders.  During the three-hour, interactive, discussion-oriented forum, Fredonia students, faculty, staff and members of our broader communities will be engaged in conversations about the joy of discovery with practitioners from a wide range of disciplines.   This interdisciplinary workshop will feature speakers from the Departments of Biology, Curriculum & Instruction, Art & New Media, English and FSA, and off-campus speakers from Roger Tory Peterson Institute and Nature Sanctuary Society of Western New York, and an independent forester.  Speakers will facilitate conversations about how and why we can act in support of our natural spaces and how we can participate in local conversations to maintain them.  Educators can learn about how natural area experiences can be integrated into their curricula to ensure future generations of students opportunities for ongoing discovery.  Participants with an interest in outdoor education, conservation, natural areas, and sustainability will benefit from the opportunity to learn alongside these experts and participants.  At the end of the Convocation a van will take participants out to the College Lodge to explore the little known eastern section of the preserve.

Returning Veterans and the Civilian/Military Divide

Brian Castner is a local Buffalo writer who has served in Iraq as a bomb defuser (EOD) on three deployments. His best selling book The Long Walk has had a tremendous reception in the United States and is already being translated into various languages. He has been featured on national television and has visited many university campuses as a speaker. He was recently featured as a guest speaker in the Chautauqua Institute's Summer seminar on Turkey. See The New York Timesreview.

This year’s convocation theme offers a unique opportunity to revisit the legacy of a writer whose interest and insight into the processes of rediscovery and memory have long made him a source of inquiry for scholars in the humanities,in the sciences and in popular media alike. This event will bring together Fredonia faculty members from the sciences, the humanities, and education, in an informal panel to share their experiences reading and discovering Proust.

The invention of writing and the discovery of the world’s first literary text, The Epic of Gilgamesh, constitute the most revolutionary events in the discipline of literature. Professor and Assyriology specialist Benjamin Foster (Yale University) will talk about the discovery of the Gilgamesh tablets, cuneiform, and the significance of the discovery. This lecture will be followed by an hour-long Q&A and discussion with professor Foster. This event will showcase the intricate link between writing, literature, and civilization, and more specifically, illuminate the audience about the discovery process of long-lost texts.

The relationship between science, war and markets begs for new eyes! In this hundredth anniversary of the Great War – World War One –the relationship between science and war is a historical commonplace, but what is less explained – and exciting to contemplate – is how mobilization for total war paved the way for a global citizenry to accept the reach, benefits and application of science in everyday life. Just as modernized war itself overwhelmed language’s ability to capture its horror, it extended the significance of science and math as the surviving symbols of progress.

To explore the ambiguities of this era, the History Department will be hosting a notable speaker, as well as a campus-wide panel discussion.

Allen Shelton is a key intellectual figure and innovator in applying auto-ethnographic methods. In his new book, Where the North Sea Touches Alabama, Shelton ushers us into realms of fantasy, revelation, and reflection, paced with a slow unfurling of magical correspondences. Though he is trained as a sociologist, this is a genre-crossing work of literature, a two-sided ethnography: one from the world of the living and the other from the world of the dead. (From the University of Chicago Press)

Graduate student alumni will share their own “Joy of Discovery” in their current position and their path after Fredonia.

Organized by Karry Kazial and the Graduate Studies Council

Dennis Dirkmaat, PhD – Forensic Anthropologist Mercyhurst Archaeological Institute:
Dr. Dirkmaat has conducted over 300 forensic anthropology cases for nearly 30 coroners, medical examiners and the state police in Pennsylvania, Ohio and West Virginia, as well as the Federal Bureau of Investigation. The cases include nearly 50 field recoveries involving the processing of evidence from human death scenes, and the comprehensive forensic anthropological analysis of over 100 sets of human remains.