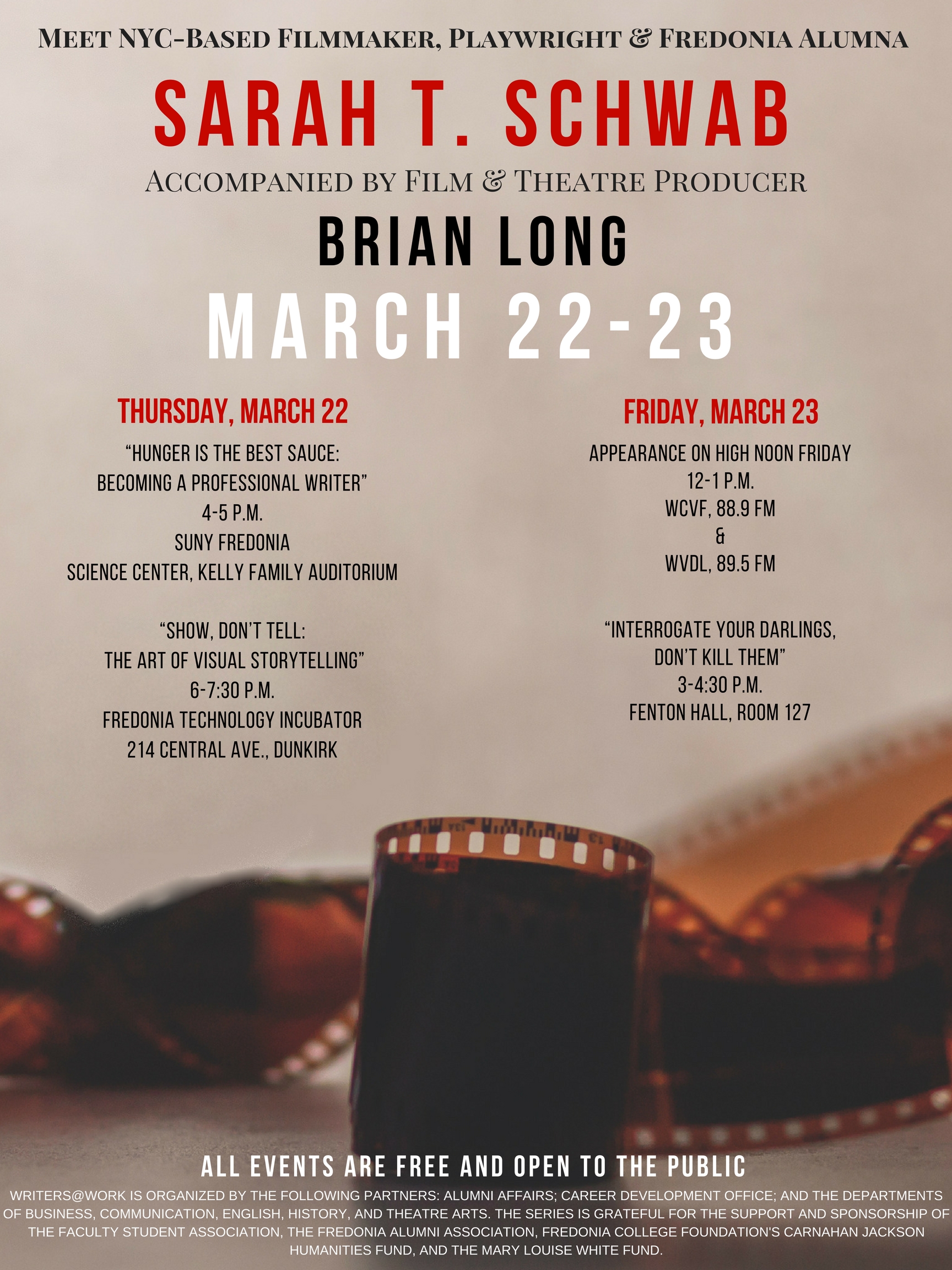 New York filmmaker, playwright to speak at Fredonia’s “Writers @ Work” alumni residency. Insight into being a New York City-based filmmaker and playwright was shared at multiple sessions by Fredonia alum Sarah T. Schwab at Writers @ Work, a residency that brings alumni back to campus to meet students. Also included in the series, to be held Thursday and Friday, March 22 and 23, is a screening of Ms. Schwab’s first film, “‘A’ My Name Is.”

Schwab, who has a M.A. (2009) and B.A. (2007), both in English from Fredonia, and is a member of the Playwrights/Directors Unit at Actors Studio, gave a craft talk on life as a full-time playwright and screenwriter living in New York, a public lecture on the art of visual storytelling and a writing workshop offering students advice for using their inner voice and harnessing their inner demons. Schwab and Long also made several classroom visits in the departments of English, communication, and theatre and dance.

In the craft talk, “Hunger is the Best Sauce: Becoming a Professional Writer,” Schwab discussed how her experiences at Fredonia – which included writing for The Leader and The (Dunkirk) Observer – helped inspire and launch her writing career. She also gave insight into the realities of being a full-time playwright and screenwriter living in New York, disclosing the challenges and successes she has experienced in her pursuit of truthful storytelling.The talk was held on Thursday, 4 p.m., in the Science Center Kelly Family Auditorium.

Schwab discussed what inspired her to write and direct her first screenplay in the talk “Show, Don’t Tell: The Art of Visual Storytelling.” The film, shot last December in Buffalo with a team that included Steve Giammaria (B.S., Sound Recording Technology, 2006) and Corey McCrea (Communication: Video Production, 2018), presents a story about a young girl with early-stage cancer who has a late-night adventure that culminates in the realization of her mortality. The talk, followed by the screening of “’A’ My Name Is,” was held on Thursday, 6 p.m., at the Fredonia Technology Incubator, 214 Central Ave., Dunkirk.

Schwab and Mr. Long met with students enrolled on ENGL: Senior Seminar and COMM 359.02: Video Journalism and THEA 338.02 Acting For Media, all on Thursday. A writing workshop, “Interrogate Your Darlings, Don’t Kill Them,” explored intuition – the writer’s heart or gut – that Schwab believes is the most important tool of a writer. The workshop was held on Friday, 3 to 4:30 p.m., in Fenton Hall 127, English Reading Room.

Writers @ Work, organized by the departments of Business, Communication, English, History and Theatre Arts, along with Alumni Affairs and Career Development Office, has brought 12 speakers to campus since 2016. It is supported by the Faculty Student Association, Fredonia Alumni Association, Carnahan-Jackson Humanities Fund of the Fredonia College Foundation and the Mary Louise White Fund.